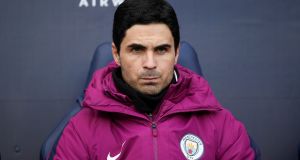 Mikel Arteta is the strong favourite to be appointed as successor to Arsène Wenger at Arsenal, with productive talks having progressed between his camp and the club.

Conversations are so advanced that Arteta is giving thought to the people he might want in his backroom team. It is unclear whether Steve Bould would stay, with Wenger’s assistant not always seeing eye to eye with Arteta when they were together at Arsenal.

The club have considered the merits of a number of managers, including Max Allegri, but the current Juventus manager wants greater control over budgets and recruitment for the next cycle of his career. Those demands do not match the Arsenal chief executive Ivan Gazidis’s vision for the job, and Allegri is understood to be leaning towards staying in Turin.

Arteta would be happy to take a job more akin to that of a head coach. That would not compromise the structure put in place by Gazidis. Last November, the club appointed Dortmund’s Sven Mislintat and Barcelona’s Raul Sanllehi as head of recruitment and football relations respectively.

Arteta, a former Arsenal captain who played for the club from 2011 to 2016, has been working as a coach at Manchester City under Pep Guardiola since July 2016. City’s manager has said he would not stand in Arteta’s way if Arsenal come calling.

“If he decides to move because he has this offer, this option, I will not say you don’t have to go,” Guardiola said. “I want the best for my friends and he’s a friend of mine. If he decides to go, I will be so sad but I will understand his decision, because it’s his career, his life, his family.”