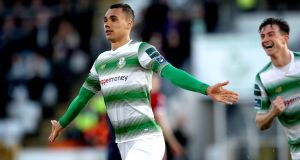 Graham Burke’s elevated status might put a few on the gate at Tallaght on Friday evening, but Stephen Bradley is without the suspended Joey O’Brien for the visit of Waterford. Sean Boyd is also ruled out, while goalkeeper Kevin Horgan is a doubt as the Dublin club looks to recover from another disappointing result on the road.

They lost 2-1 when the two sides first met this season at the RSC, but Bradley recalls it as a night when anything that could go wrong did, with Ally Gilchrist sent off early and another couple limping out of things. At least last week’s game at Richmond Park provided a reminder of the importance of keeping 11 players on the pitch.

The visitors have Dave Webster suspended for the game against his old club, while Kenny Browne, Stanley Aborah and Johnny Kavanagh are all expected to miss out through injury.

A win could put Waterford level with Cork at the top, although John Caufield’s men will be confident enough as they head to Derry for a sold-out game with what is likely, pending a few late tests, to be a full squad of players.

Dundalk are down a few, most obviously Stephen O’Donnell, who suffered a broken leg last week, for their meeting with Sligo Rovers, but Dan Clearly is in contention to start as Stephen Kenny looks to get his side back to winning ways.

For Sligo, Michael Schlingermann is another one who will be sitting out a trip to a place where he once played regularly, but Adam Morgan and Seamus Sharkey are both in with a shout of starting.

Owen Garvan and Christy Fagan face late tests for St Patrick’s Athletic who travel to Limerick, and Bohemians have Rob Cornwall and Dinny Corcoran back for their game at Bray. The hosts, who will see this as an opportunity to build a little bit of momentum in the wake of their win over Derry, have Kevin Lynch suspended.