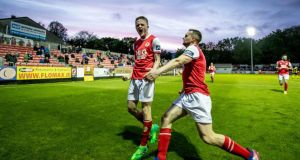 Despite St Patrick’s enjoying good possession and looking threatening, it was Sligo who produced the two clear-cut chances of the first half.

The visitors defended well early on with Callum Waters deflecting a Conan Byrne shot out for a corner while captain Kyle Callan-McFadden cleared off the line.

Callan-McFadden met Rhys McCabe’s corner with a firm near post header that looked destined for the corner of the net before goalkeeper Barry Murphy made a brilliant save with the ball then scrambled clear.

Adam Wixted’s clever feet worked an opening down the inside-left channel with Murphy showing his agility to tip over the Sligo winger’s left foot drive.

The game remained open into the second half with half chances at either end before St Patrick’s took a 51st minute lead.

Darragh Markey and Ryan Brennan worked the ball to right-back Simon Madden on the overlap. His cross picked out Clarke at the back and the winger drilled his shot low to the corner of the net.

Conan Byrne had a shot bravely block while Ryan Brennan’s goal-bound header struck a team-mate as St Patrick’s pressed for a second goal.

Home substitute Killian Brennan came close to a spectacular goal on 73 minutes as his 35-yard volley was batted away by Mitchell Beeney.

In a frantic finish, John Mahon blew a glorious chance of an 85th minute equaliser, blazing over the bar from just yards out.

Teenager Byrne, on his first league start, then slotted home a 91st minute spot kick for his first goal for the club to seal the win after Jake Keegan had been fouled by Jack Keaney.