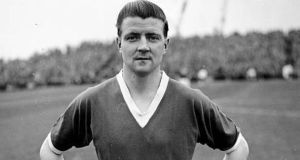 Arthur Fitzsimons who passed away on Wednesday at the age of 88, will be recalled as one of the outstanding Ireland players in the immediate post-war years.

Within weeks of suffering the disappointment of Shelbourne’s defeat by Dundalk in the 1949 FAI Cup final, the Dubliner was on his way to Middlesbrough to play alongside Wilf Mannion, one of the most highest profile forwards in England.

In time, Fitzsimons replaced Mannion at inside forward and from this base went on to win 26 Ireland caps at a time when the achievement was bettered only by Jack Carey, Con Martin and Peter Farrell.

The most memorable of these were the two World Cup games, home and away, against England in May 1957, belated compensation for his misfortune in losing out on a place in the team which famously defeated the same opposition at Goodison Park in September 1949.

After commanding first team status at Middlesbrough for eight years, Fitzsimons had a brief spell with Lincoln City before venturing further afield to embark a coaching career in the Middle East.

1 Henshaw the only change as Andy Farrell names Ireland team for Paris
2 Gordon D'Arcy: Ireland must go after victory by frightening France into mistakes
3 Warren Gatland: England players could miss Lions tour if not released for Japan warm-up
4 Women’s GPA says demands on female GAA players are ‘increasingly unsustainable’
5 Cian Healy: ‘Realistically I got away with murder when I was younger’
Real news has value SUBSCRIBE
Crossword Get access to over 6,000 interactive crosswords