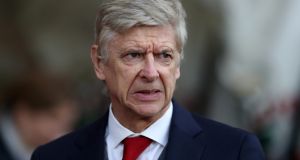 Arsenal manager Arsene Wenger: “It is difficult to take when you lose a big game to see the 100% celebration on the other side.” Photograph: Catherine Ivill/Getty Images

Arsene Wenger doesn’t think it is realistic to expect footballers to “commit 200 per cent on the pitch and be an angel after”.

Speaking in relation to the hullabaloo over the celebrations that bubbled up with reports of high emotions in the tunnel at the Manchester derby at the weekend, the Arsenal manager was reminded of his time watching sumo wrestling when he was manager of Japanese side Grampus Eight for a totally different experience of those twin imposters of success and failure.

“In sumo you never can tell who the guy who wins is,” Wenger says. “He doesn’t show his happiness because of respect for his opponents, and that shows how deep the culture is there for the respect for each other.

“Is it something you can copy? I don’t think so because it’s not part of our culture. It is difficult to take when you lose a big game to see the 100 per cent celebration on the other side. It’s always a little bit like an offence.

“Sometimes that can happen in big derbies. In fact, you are always very good in the press because you build these things up like it’s life or death and after something happens you are surprised.

“It’s part of the intensity and importance of the games; sometimes it can go a bit overboard. It happened to us, it happened to them and it’s unfortunate. Ideally you want the passion to be on the football pitch.”

Wenger wants full intensity from his team at an improving West Ham on Wednesday night. Aaron Ramsey joins Shkodran Mustafi on the short-term injury list, and Wenger is mindful that his team have one day less of recovery time than West Ham during this busy part of the season.

“It will be a tricky test because they were unlucky against City, they rebuilt some confidence against Chelsea, so it will certainly be a game against a more confident and more dangerous West Ham team,” says Wenger.

Jack Wilshere and Olivier Giroud are pressing for a first start to the season. Wenger is conscious that the French striker, who scored Arsenal’s late equaliser at Southampton, wants games in a World Cup season and might be feeling some frustration.

“Of course. First of all he has played many games, much more than people speak about. He has played more minutes since the start of the season than [Alexandre] Lacazette. That is not always well known.

“When you are at a big club you have many big strikers and nobody can guarantee that you will play. He is not a sub for me, he is a regular player, but I have plenty of good strikers and you cannot play all of them together.

“Every players who does not play wants to start in the Premier League, that is absolutely normal. When you have three games like we have this week in six days there is an opportunity for them to start.”

Rumours of a departure have resurfaced, but Wenger restates his admiration for Giroud: “Personally I want him to stay until the end of the season and then we will see.”