Ireland international has been discharged from hospital after undergoing surgery 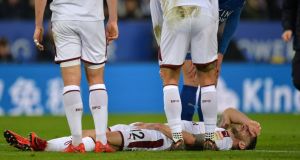 Robbie Brady’s season could be over with Burnley revealing that the Dubliner is to have surgery to repair “sustained damage” to his patellar tendon.

The player suffered the injury in a clash with Leicester City’s Harry Maguire on Saturday when he had to be replaced after half an hour and while it was clear the problem was a serious one, news that he has to undergo this particular treatment will still come as a major blow.

Rehab after the operation in question is generally put at four to six months, something that raises the possibility that it will be next season before the Irishman kicks a ball competitively again.

Burnley boss Sean Dyche declined to speculate on the period that the player will be ruled out for, though, saying only that: “Robbie will have surgery to repair a patellar tendon tear and will be out for a substantial recovery period.

“He will be given all the time and care he needs on his recovery and supported throughout from all of us at Burnley Football Club.”

Brady only joined the club in January and after a relatively subdued start had been finding a really rich vein of form since the start of the current season with a succession of strong performances yielding his first league goal of the campaign against Bournemouth a couple of weeks back.

He seems fairly certain to miss any friendly games that Ireland play in March and perhaps even those lined up for the summer although if his recovery goes well he could return for his club for the closing weeks of the league campaign.