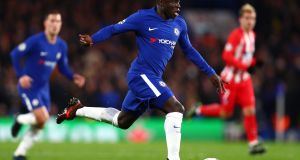 N’Golo Kanté is currently more deserving of the Ballon d’Or than Eden Hazard, according to Antonio Conte, but only the Belgian has the chance to win it in his career, the Italian has said.

Speaking before Chelsea’s Premier League match at West Ham, he spoke of nurturing in Hazard the “sacred fire” that drives the top players to “win, win and win”.

But he also compared himself to Kanté, who came eighth in the vote – the highest ranking for any Premier League player – and said the Frenchman deserved the prize.

“For sure [Hazard] is a fantastic player, he is important, but at the same time I tell you that to win the Ballon d’Or you have to win, and in your career you have to win a lot,” Conte said.

“For [this year’s winner] Cristiano Ronaldo it’s the fifth time, like Messi. It means that in the last 10 years it didn’t change, two players, three players, because also there is Neymar.”

Conte has previously described Hazard as being in the world’s top three players, and he emphasised the qualities that set apart the game’s truly elite players.

“I like to call it a ‘sacred fire’ when you have it inside you; the will to win every game,” Conte said. “At this level we all have it inside us. Then the flame can be big or little. When you have an inferno it means you are like Messi, Ronaldo, Neymar.

“When I was a player I wanted to win the Ballon d’Or but I knew my characteristics, I knew that it was impossible,” Conte said.

“But I won a lot in my career. I won everything. I don’t know if Kanté can win the Ballon d’Or in his life because of the characteristics of this player. He doesn’t score a lot of goals. He is a great worker.

“You have to respect it is a particular classification.”