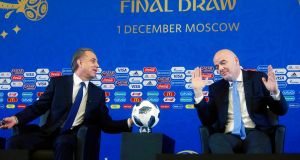 Cornel Borbely, Fifa’s ethics committee chairman, was investigating the alleged role of Russia’s deputy prime minister for sport, tourism and youth policy, Vitaly Mutko, in state-sponsored doping when Fifa abruptly removed the Swiss from his job in May.

Mutko was banned this week from all future Olympic Games by the International Olympic Committee, which accepted evidence that he was centrally involved in systematic doping of athletes, but Fifa has taken no action.

Formerly a Russian minister of sport, Mutko was alleged to have overseen the vast doping programmes before the 2012 London Olympics and 2014 Sochi Olympics. He is still president of the Russian football association and the organising committee for the World Cup next year.

Borbely, a Zurich lawyer who chaired the investigatory arm of Fifa’s ethics committee, was examining the voluminous evidence on Russia and Mutko’s activities when Fifa decided at its congress in Bahrain not to renew his tenure. Mutko would be barred from football if the ethics committee agreed with the World Anti-Doping Agency, its investigator Richard McLaren and now the IOC, that Mutko was directly involved in state-sponsored doping.

Gianni Infantino, the Fifa president, sought in March to prevent its independent governance committee barring Mutko from the Fifa council, arguing it would damage the prospects of a successful World Cup in Russia.

Miguel Maduro, the Portuguese law professor who chaired that committee and maintained its decision because Fifa’s rules require politically neutral council members, was also fired at the Bahrain congress. Maduro told the UK parliament’s select committee for digital, culture, media and sport in September that he had been urged by Fatma Samoura, Fifa’s secretary-general, to change his decision and declare Mutko eligible. “She said the World Cup would be a disaster and that as a consequence the continued presidency [of Infantino] would be in question,” Maduro said.

Fifa has taken no action against Mutko or Russia in nearly 18 months since Wada asked its ethics committee to investigate the findings made by McLaren in his first report, in July 2016, of Russian state doping and a systematic cover-up. Borbely is understood to have contacted Wada and McLaren for the evidence but was not supplied with much material, because McLaren was conducting further investigations.

In December last year, Wada published McLaren’s second report, which found “an institutional conspiracy across [more than 1,000] summer and winter sports athletes, who participated with Russian officials within the ministry of sport and its infrastructure”.

Wada said this had been concluded from forensic testing, “based on immutable facts”, not only on the evidence of the whistleblower Grigory Rodchenkov, the former head of the Moscow anti-doping laboratory. Authoritative sources said that after that second report, Borbely contacted Wada again and this time McLaren did send him a substantial volume of evidence. Borbely is understood to have been examining the material, to form a view about whether he considered that action should be taken against Mutko, when his tenure was not renewed.

Borbely and Hans-Joachim Eckert, the chair of the ethics committee’s adjudicatory branch, were given no notice of the decision to terminate their tenures. The FA and its representative David Gill, who is paid $300,000 a year to be a member of the Fifa council, supported the decisions to replace the ethics committee chairmen and Maduro.

Borbely and Eckert warned that their removal would set back their investigations into hundreds of cases and “incapacitate” the fight against corruption. Borbely was replaced by a Colombian judge, Maria Claudia Rojas, and he is understood to have given her the material from McLaren.

The IOC based its decision to ban Mutko and Russia from the Pyeongchang Winter Olympics on a report from a commission looking at McLaren’s work, chaired by the former Swiss president Samuel Schmid. Rodchenkov gave further evidence to Schmid, repeatedly stating Mutko was central to the doping conspiracy.

Fifa declined to answer questions about whether Rojas is proceeding with an investigation into Mutko, referring to the statement made after the IOC’s decision, which said: “When it comes to potential disciplinary or ethical matters concerning specific individuals, it will be up to the respective Fifa bodies to evaluate them.”

Mutko has rejected all the allegations and did so again at last week’s World Cup draw in Moscow, where Infantino sat alongside him. The FA declined to comment. – Guardian service

1 Andy Farrell ticking all the boxes in advance of England showdown
2 David Brady says he has witnessed the illegal payments of GAA managers
3 Players impressed with Bono’s Irish pride and desire
4 Owen Doyle: Day of the jackal may be coming to an end
5 Ireland wary of Peyper calling the tune as they head for Twickenham
Real news has value SUBSCRIBE
Crossword Get access to over 6,000 interactive crosswords