Heynckes and Zidane in a race for third Champions League title

Real Madrid and Bayern Munich meet in semi-finals on Wednesday 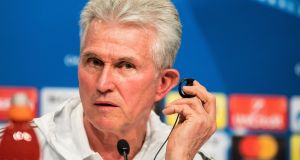 Bayern Munich’s head coach Jupp Heynckes: “I came back at a very old age and now I have the privilege of being successful again, reaching a semi-final and possibly going through to the final.” Photograph: Lukas Barth/EPA

“Nobody had any intention of me being here,” Jupp Heynckes said, sitting at a desk at the Allianz Arena, a microphone tilted towards him, the board behind splattered with sponsors, a card in front saying “Uefa Champions League”.

It turned out he was not finished after all but, at 72, this really will be the last time, one more European night in Munich. Six months after being pulled from retirement, called by his old friend Uli Hoeness and asked to coach Bayern for a fourth time, he leads his club into another semi-final. In front of him stands another club with which he has won this competition, Real Madrid.

Returning was, Heynckes said then, “a question of the heart”. But if he was coming back, it was to compete. Bayern recovered: the league title is won, the cup awaits and another treble is possible, as in 2013.

“I adore football and, if I do a job, I do it 100 per cent,” he said here. “These are the games you work for and lots of coaches never get the chance to play one of these in their lives. I came back at a very old age and now I have the privilege of being successful again, reaching a semi-final and possibly going through to the final. I am confident.

“Football has changed but my style of leadership, my approach, hasn’t. The game has progressed but in the end they are still people out on the pitch, people with different personalities and feelings.”

The best example has been James Rodríguez, on loan from Madrid. Bayern will make the deal permanent at the end of the season. “He was a bit down, not in good physical shape either, but I have talked to him a lot and bit by bit his confidence came back. He is more free now and our fans love seeing him play. He has fantastic vision, he’s integrated into the team, happy in Munich. The team that wins the Champions League is the one that is most united.”

Toni Kroos, who was part of Bayern’s 2013 Champions League-winning team and plays for Madrid, said: “I have the feeling they are much better off with Heynckes. Physically they look to be in good shape, you can see there is a good atmosphere in the team and the whole club.

“Heynckes is able to make the collective function; the atmosphere within a team is very important. It’s not just about tactical issues; it’s also good to keep everyone happy. We’re here to change that a bit.”

And that is the thing. For all Heynckes’s confidence, for all that he responded to questions about how he could stop Cristiano Ronaldo by replying, “I might ask you how they can stop Robert Lewandowski, ” he was quick to note Madrid are formidable.

The chance to win this trophy a third time awaits, something achieved only by Bob Paisley and Carlo Ancelotti. But the team standing before him are Real Madrid and, as Kroos put it, “the Champions League releases special powers” in them. The man occupying the other bench also has a special relationship with this competition and in which he has admitted to feeling he has some kind of guiding “star”.

Zinedine Zidane, like Heynckes, is seeking his third European Cup as a manager. It took him 18 months to win two, the first manager in the Champions League era to win consecutive titles; it is 20 years since Heynckes first won it, five since his last. In 1998 he won it with Madrid, ending the club’s 32-year wait to be European champions again – “a liberation,” Heynckes called it, although he insisted he had never watched the video. On the other side, playing for Juventus, was Zidane, 27 years his junior.

“He is a coach I have maximum respect for, for what he had done at Bayern and at Madrid too,” Zidane said. “He has done great things, he’s admirable. I only have good words for this man. And Bayern is not just a good team, it’s a great club.”

The feeling is mutual; there was warmth in Heynckes’s words. “I have played against great players and coaches: Sacchi, Cruyff, Lippi, Happel, and I have always been a great admirer of Zinedine Zidane as a player and a coach,” he said. “I love how Real Madrid play and his calmness on the touchline, not making a big fuss, not playing to the gallery or the TV cameras. For 90 minutes he follows what is happening on the pitch.”

There is something more than finance, Heynckes noted, something deeper that has revived. And while he was clearly enjoying this, there was also a sense of vindication, and his line sounded perhaps more pointed when it is considered these teams, though no paupers, faced Paris Saint-Germain this season and, unlike the French champions, are still there. “A team has to respect itself, have human qualities. You can’t buy the Champions League,” he said. You cannot buy moments like this either. – Guardian Service