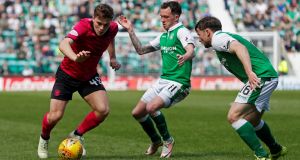 Celtic winger James Forrest is relishing the chance to clinch the Ladbrokes Premiership title against Rangers next week after Saturday’s humbling by Hibernian.

The Hoops were set to celebrate their seventh successive league triumph at Easter Road, but the home side went off-script with a scintillating performance. James Maclaren and substitute Vykintas Slivka gave Neil Lennon’s side a two-goal lead before Hoops substitute Odsonne Edouard scored a consolation goal with four minutes remaining.

There are four fixtures to go and Rangers, who beat Hearts 2-1 at Ibrox to go within 10 points of Brendan Rodgers’ side, are the visitors to Celtic Park next Sunday, with Forrest hoping to seal the title in front of a sell-out crowd.

The Scotland attacker said: “Hibs played well and we obviously didn’t play as well as we can, so we need to give credit to Hibs and look forward to next week and hopefully win it then.

“We have four games left and want to wrap the title up as soon as we can – but it wasn’t to be against Hibs.

“After the season we’ve had, we need to be positive. This defeat is gone now and it would be tremendous to now go and do it in front of our own fans and give them something to cheer about.”

Forrest noted that Hibs had drawn 2-2 twice with Celtic and narrowly lost 1-0 in the previous three league games, in addition to losing 4-2 to the Hoops in the Betfred Cup semi-final.

The Easter Road side remain in fourth place, three points behind Rangers and Aberdeen.

He said: “Hibs have given us a hard game every time we have played them this season. We have never run away with it. Even in the Betfred Cup semi-final, it was tight.

“They have been very good this season and credit to them in their first season back up.“It’s always been very close games and they were up for it right from the start. We knew what they would do and we just didn’t match them. They deserved the win but we won’t dwell on it, we need to look forward now.”

Hibs boss Neil Lennon, who won the first three of the current six titles when he was manager at Celtic, believes his side have been all but ignored in the race for second spot.

He said: “Nobody has been talking about it, all the talk has been about Kilmarnock and teams not doing so well. We have been largely under the radar. We are in a good vein of form and we needed to be against Celtic. It was a great team performance.”