Racism in football has simply moved from terraces to social media 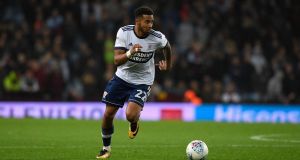 Middlesbrough and Ireland full-back Cyrus Christie has been the victim of racist abuse on Twitter. Photo: Getty Images

The speed with which arrests were made at Anfield on Tuesday night after an Irish Liverpool fan was assaulted and left fighting for his life is a reminder of how the policing of big football matches has been transformed in England since the heyday of hooliganism.

Technology has made it almost impossible for assailants to melt back into their crowd and retain their anonymity. The trouble hasn’t entirely gone away but the sense is certainly that the spaces in and around stadiums are far safer places to be than they were between the seventies and nineties.

It seems somewhat ironic then that online, purveyors of racist hate around football are able to hide in plain sight.

Not for the first time Republic of Ireland Cyrus Christie has been their target this week. The  Fulham full-back retweeted some of the vile racist imagery sent his way over the past couple of days and openly challenged Twitter to identify the culprits. If he has had a positive reply, he hasn’t shared it yet.

The apparent inability, or unwillingness, of the big social media operations to more effectively tackle issues like racism and misogyny online is endlessly frustrating.

Clearly there are ways in which the more determined perpetrators can sidestep some safeguards but the level of effort currently being put into making them accountable for their online lives seems to fall abysmally short of what is required of companies who now control, or at least host, such a significant portion of the public discourse.

Facebook, we have seen, is ruthlessly efficient when it comes to amassing information on what we are and what it is we do then profiting from the assembled information. Effectively policing what is being published on their platform is, we are routinely told, beyond them because there is simply too much going on.

Yet surely the very least they can do is to establish with some certainty who is signing up in the first place so that when players like Christie, or countless ordinary users are subjected to abuse, those behind it can be readily identified.

With Twitter, my own experience of getting a blue tick required a change of the email provided to one that was more reliably verifiable. Maybe that is the minimum that should be required just to open an account.

Perhaps it should be much more but nobody should be able to threaten the life of a person in a message accompanied by an image portraying a lynching, as somebody did with Christie, and believe they are doing so with impunity because their profile consists of picture of a random footballer and a made up name.

Show Racism the Red Card (which, I should mention, I do a bit of work with) will demonstrate next week just how football can be used as a force for good in this ongoing battle when (we hope) Martin O’Neill presents some of the prizes at the organisation’s annual creative art competition, something teachers in schools up and down the country use as a vehicle for raising the issue of race and racism.

The idea for the charity apparently came to Shaka Hislop when the attitude of a bunch of youths who had been racially abusing him on the street was suddenly transformed when they realised who he was. The plan was to harness that power of celebrity to get the message across although the case of Christie clearly suggests that their fame can also make black players an attractive target with social media making them easy ones too.

Christie has dealt impressively with the issue every time it has arisen and he is probably in a slightly better position to do so than many of the victims of online bullying, whatever its nature. They all need to be adequately protected, with the involvement of the police where appropriate, but that will only be possible when the companies involved start living up to their responsibilities.

In the meantime, football remains a major battleground in the war against racism. A trip to a local park on a Saturday or Sunday morning will show how it is being used to bring kids of different ethnicities together.

Programmes like Club Welcome – where small grants have been provided to fund coaching and other targeted initiative – have shown how sports clubs, not just soccer ones, can play a key role in the integration of immigrants and refugees around the country.

The war may never be won; the assault outside Anfield is a reminder that non-race related and sometimes entirely random violence has not been entirely eradicated from the game but the sense of outrage that accompanied the news late on Tuesday night underlines the fact that an awful lot of progress has been made.

Some progress too, as anyone who frequented English club games 30 years ago will tell you, has been made when it comes to racism in and around grounds but Christie’s experience show how that the problem has simply shifted from one place to another.

If we don’t get to the stage where the open abuse of players on the basis of their race comes to be regarded as just as shocking as an assault based on club affiliation then we will have come up terribly short. Some of the steps required don’t seem all that challenging but the levels of solidarity we show do need to go a little deeper than a name on the back of a shirt.

Joey Carbery’s cameo seals Munster win over Cardiff 22:16
Japan to begin letting Olympic athletes in from next month – report 21:24
Formula One revenues fall 43% as pandemic takes its toll 21:19
Bundee Aki and Connacht get out of jail against Benetton 20:59
Make or break for Eddie Jones and England against resurgent Wales 20:30