Liverpool look to stay on top, while Ole Gunnar Solskjaer’s back at Old Trafford 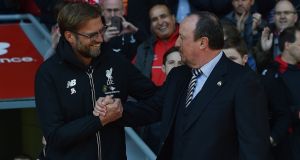 Brighton (13th) v Arsenal (5th)
Shane Duffy will replace Lewis Dunk in the centre of defence for Brighton.
Duffy is available after a three-match ban and steps in for his usual defensive partner Dunk, who is now suspended following his red card against Bournemouth. Wingers Alireza Jahanbakhsh (hamstring) and Jose Izquierdo (knee) are still out injured.

Arsenal could be without as many as five defenders for the trip south. Rob Holding (knee), Konstantinos Mavropanos (groin) and Hector Bellerin (calf) are definitely out, while Nacho Monreal (hamstring) will be assessed and Shkodran Mustafi (hamstring) is set to return to training this week. Playmaker Henrikh Mkhitaryan (fractured metatarsal) is out for six weeks and striker Danny Welbeck (ankle) is a long-term absentee.

Burnley (18th) v Everton (11th)
Burnley are likely to host Everton with the same squad which fell to defeat at Arsenal. Midfielder Robbie Brady recovered from a knock to start at the Emirates Stadium and could feature again. Winger Aaron Lennon (knee), goalkeeper Nick Pope (shoulder) and left-back Stephen Ward (knee) will be absent while midfielder Steven Defour (calf) is unlikely to be back.

Idrissa Gana Gueye could return to the Everton squad after missing the last two matches with a groin problem. Gueye’s availability could be timely as fellow midfielder Andre Gomes was forced off with a knee injury against Tottenham on Sunday.

Crystal Palace (14th) v Cardiff (17th)
Goalkeeper Wayne Hennessey and midfielder Cheikhou Kouyate are expected to return for Palace. Full-back Martin Kelly is doubtful but has not yet been ruled out by manager Roy Hodgson and will be assessed. Striker Christian Benteke remains on the sidelines.

Joe Bennett could be back in the mix for Cardiff. The full-back missed Saturday’s 5-1 home defeat against Manchester United after being forced off at Watford the previous weekend, but he has returned to training. Danny Ward is out, though, while Jazz Richards has been battling to overcome a hamstring problem.

Fulham (20th) v Wolves (10th)
Fulham boss Claudio Ranieri has no fresh injury problems. Winger Ryan Sessegnon missed the goalless draw at Newcastle with a groin strain and could return. There was no place either for midfielder Andre-Frank Zambo Anguissa as he recovers from a knock.

Diogo Jota (hamstring) is likely to remain out for Wolves after missing Friday’s 2-0 defeat to Liverpool. Conor Coady and Ryan Bennett are one caution away from a suspension ahead of the yellow card amnesty.

Manchester City will check on midfielder Fernandinho after he missed Saturday’s loss to Crystal Palace with a thigh problem. The game may come too soon for David Silva, although the playmaker has returned to light training, while defenders Vincent Kompany and Danilo are again doubtful. Left-back Benjamin Mendy and goalkeeper Claudio Bravo are long-term absentees.

Liverpool (1st) v Newcastle (15th)
Liverpool defender Trent Alexander-Arnold is set to return after missing the last two matches with a foot injury. Naby Keita is expected to resume training ahead of the game after sustaining a foot injury and bruised ribs at Wolves on Friday. Centre-backs Joe Gomez (fractured leg) and Joel Matip (broken collarbone) remain sidelined for another three to four weeks.

Newcastle will be without South Korea midfielder Ki Sung-yueng after he headed off to the Asia Cup. Jonjo Shelvey is struggling to shake off a thigh injury so Isaac Hayden could come into contention. Ciaran Clark (ankle) missed Saturday’s 0-0 draw with Fulham while Federico Fernandez (calf) was on the bench. Goalkeeper Karl Darlow (elbow) is still out.

Tottenham (3rd) v Bournemouth (8th)
Dele Alli may not be risked after being forced off at half-time of Tottenham’s 6-2 win over Everton with a minor hamstring problem. Fellow midfielder Moussa Sissoko could be rested after playing all but seven minutes of the last five matches.

Watford (7th) v Chelsea (4th)
Watford will have an unchanged squad for the visit of Chelsea as Will Hughes (hip), Andre Gray (leg), Sebastian Prodl (knee) and Adalberto Penaranda (foot) remain sidelined for the Hornets

Alvaro Morata should be fit for Chelsea despite struggling with a knee problem. He is back in full training and Blues boss Maurizio Sarri is hopeful he will be ready to return at Vicarage Road. Andreas Christensen (hamstring) may miss out again.