West Ham player could clear up international future before Christmas 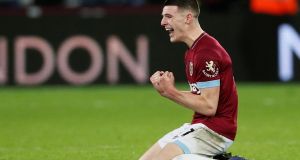 A declaration by London born teenager Declan Rice that he intends to play international football for the Republic of Ireland is believed to be imminent.

The 19-year-old was capped at senior level for the first time by then manager Martin O’Neill in the game against Turkey back in March. The team was beaten but the debutant shone.

He played two further games for Ireland before being omitted from the squad for the Nations League game against Wales when an appearance by the versatile West Ham player would have resolved his international future. There were by them widespread reports that England manager Gareth Southgate had stepped up his interest in securing the services of a player who was, based on this Premier League form, quickly coming to be seen as a major prospect.

The English FA made an approach and Rice is reported to have travelled to St George’s Park where a presentation was made on the opportunities that might be open to him in the country’s international set up over the coming years.

O’Neill always said that he retained the hope that the player would ultimately decide against switching his international allegiance, however, and cited his strong feeling that Rice’s father Seán was keen to see his son continue playing for Ireland.

With the change of manager, securing a commitment from Rice became a priority for O’Neill’s successor, Mick McCarthy, and it is understood that a recent meeting between the two went well, prompting a number of FAI sources to suggest this week that they now expect him to formally declare his intention to continue playing for Ireland.

It had been understood that the midfielder, who has continued to win widespread acclaim for his club performances in recent weeks, would make his intentions clear before Christmas and although McCarthy declined to make any comment on the situation when asked about it earlier this week, there are suggestions now that an announcement is indeed about to be made.