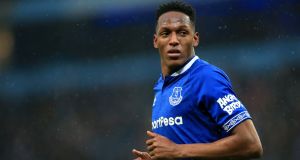 Yerry Mina of Everton during the Premier League match between Manchester City and Everton at the Etihad Stadium. Photo: Simon Stacpoole/Offside/Getty Images

Everton have launched an investigation after a video of fans singing a song about Yerry Mina that contained racist stereotypes emerged on social media.

Together with football’s equality and inclusion organisation Kick It Out the club, who have stressed they have a “zero tolerance” stance towards racism, are looking into the footage, which includes a chant – to the tune of Macarena – containing racist stereotypes about the Everton and Colombia defender.

The song has similarities to one sung by Manchester United fans about their striker Romelu Lukaku which led to the Old Trafford club issuing a warning to supporters not to sing it again.

“Everton Football Club is aware of the video posted on social media by an unaffiliated supporters’ club,” said an Everton statement. “We are in contact with Kick It Out and are working with them to investigate the matter further. Everton has a zero-tolerance stance towards any form of racism.”

Mina joined Everton from Barcelona in the summer for £27m and has established himself in the side after recovering from injury in November.

In recent weeks high-profile incidents, involving Arsenal’s Pierre-Emerick Aubameyang and Manchester City’s Raheem Sterling, have reignited debate about race issues in football, although the fans involved on both occasions have denied having racist motivations. – Guardian service