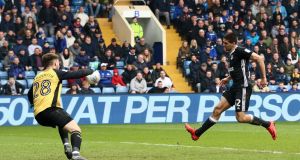 Aleksandar Mitrovic continued his remarkable goal-scoring form as Fulham edged Sheffield Wednesday 1-0 to move to within two points of the top two in the Championship.

The Cottagers had an opening after Cardiff suffered a dramatic defeat to leaders Wolves on Friday night and Mitrovic made sure they took advantage with his 11th goal in 10 games 12 minutes from time.

Cardiff have a game in hand but next face a trip to fourth-placed Aston Villa, whose automatic promotion hopes are hanging by a thread after they lost 3-1 at Norwich.

The impressive Josh Murphy put the hosts ahead in first-half stoppage time and they wrapped up the victory thanks to goals from Dennis Srbeny and James Maddison either side of Jack Grealish’s effort.

Barnsley boosted their survival chances as they came back to secure a 3-2 win over South Yorkshire rivals Sheffield United, who are now four points off the top six.

Gary Gardner put the Reds in front with his first goal for the club but John Fleck and Leon Clarke netted after half-time to turn the game on its head.

Millwall’s charge for a playoff spot continued as they beat Bristol City 2-0 to dent the Robins’ own top-six aspirations.

Goals in either half from Jed Wallace and Steve Morison were enough to stretch the Lions’ unbeaten run to 15 games.

Derby and Middlesbrough kept Millwall at arm’s length with victories over Bolton and Nottingham Forest respectively.

Alex Pearce, Matej Vydra and Tom Lawrence gave Derby a 3-0 win that leaves Bolton looking over their shoulder in their fight to avoid the drop, while Daniel Ayala and Stewart Downing ensured Forest boss Aitor Karanka suffered a 2-0 defeat on his return to Boro.

Bolton’s position just above the bottom three would have been more perilous had bottom two Sunderland and Burton not surrendered leads.

Burton were denied all three points away to Birmingham City after Lukas Jutkiewicz’s late goal cancelled out Lloyd Dyer’s opener.

Hull took a huge stride towards survival themselves as they hammered QPR 4-0 – Harry Wilson, Alex Smithies (own goal), Kamil Grosicki and Abel Hernandez all finding the net. Nedum Onuoha rounded off a miserable afternoon for the visitors when he was sent off in stoppage time.

Neal Maupay’s penalty was enough to give Brentford victory over Ipswich.