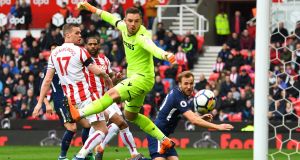 Christian Eriksen was credited with a brace as Harry Kane was denied a crucial goal in the Golden Boot race in Tottenham’s 2-1 win over Stoke at the bet365 Stadium.

Eriksen broke the deadlock in the second half before scoring direct from a free-kick which appeared to just evade Kane’s head, preventing the Spurs striker from claiming a 36th goal of the season and moving four behind the Premier League’s leading scorer Mohamed Salah.

In between Stoke had levelled through Mame Diouf, but the loss means they are four points from safety with five games to go.

Paul Lambert had insisted he would pay little attention to the previous four thrashings Spurs had inflicted on Mark Hughes’ Stoke as he set his side up differently.

That was evident when he kept faith with the starting XI that lost 3-0 to Arsenal last weekend with Diouf, who overcame a calf problem to start, blazing a good opportunity over early on.

Tottenham had been sluggish to start against Chelsea last weekend and they were struggling for momentum here too until Son Heung-min was sent through one on one by Dele Alli.

The South Korean bore down on goal only for Jack Butland to rush out and smother his attempt with the half’s biggest chance.

The Potters had been typically spirited and that inspired a crowd that needed no encouragement to jeer Danny Rose for his part in a Ryan Shawcross dismissal in 2014.

Yet the majority of the bet365 Stadium was silenced seven minutes into the second half when Eriksen continued his fine form in front of goal.

Mousa Dembele’s pass released Alli down the right and he neglected passing to Kane, instead biding his time for Eriksen to break into the box and sweep home the opener.

In previous four meetings with Spurs, each of which they had lost by a four-goal margin, Stoke had folded after conceding first but they levelled within five minutes here.

Xherdan Shaqiri’s first real involvement was to curl a pass behind the defence that Diouf chased, with Hugo Lloris’ clearance cannoning off the Senegalese and back into his path to allow him to roll into an empty net.

The Stoke forward fell to the floor with an injury sustained challenging Lloris but, crucially for his team, he had been upright long enough to score the goal.

Spurs would soon restore their lead, though the identity of their scorer was no clearer from multiple replays.

The Stoke defenders were not close to Kane from Eriksen’s free-kick, which was curled into the bottom corner.

Stoke, who had seen Kane score eight times again them in their previous four games against Spurs, hit the crossbar through a Shaqiri free-kick but were unable to get another equaliser and they remain in deep trouble.