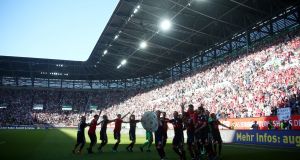 Bayern Munich’s players celebrate winning the Bundesliga with a replica trophy in front of the fans at the end of the match at Augsberg. Photograph: Michael Dalder/Reuters

Jupp Heynckes hailed the collective effort of his team, and also paid tribute to former boss Carlo Ancelotti, as Bayern Munich delivered their sixth straight Bundesliga title with a 4-1 win at Augsburg.

Bayern’s Bavarian neighbours Augsburg, though, were out to spoil the party and took an early lead through a bizarre own-goal from defender Niklas Süle after 18 minutes.

Heynckes’s much-changed side, though, soon pulled themselves level through Corentin Tolisso’s header after 32 minutes and James Rodriguez fired the the visitors in front before the break.

Arjen Robben lashed in a third just after the hour with Sandro Wagner nodding in a late fourth as Bayern delivered a 28th German league title.

Heynckes took over from Ancelotti after the Italian was sacked at the end of September following a 3-0 Champions League defeat at Paris St Germain.

The Bayern boss paid tribute to his squad and the work of their former head coach after another professional performance, which came on the back of a Champions League quarter-final first leg win at Sevilla.

“The coach is responsible for the big picture, but first and foremost the players are the protagonists. I have a very well-functioning coaching team, everyone’s doing an outstanding job. Everyone played their part in the success,” Heynckes told the Bayern Munich website.

“We raised a glass to good music in the dressingroom. Everyone can be pleased, it’s magnificent.

“I’d like to send my regards to Italy, to Carlo Ancelotti. He guided the team at the beginning of the season, warm congratulations on winning the championship title.

“He’s not only a great coach, but also a great person.”

“People from outside always say we have to win the title, but it’s up to us to achieve it. There are no presents in the Bundesliga, so a huge compliment to the team,” he said.

Bayern will now regroup as they look to finish the job and secure a place in the semi-finals of Europe’s elite club competition when Sevilla come to the Allianz Arena on Wednesday night.

Robben added: “We have to enjoy it, but stay focused on football.”

1 Gordon D'Arcy: I know what Joe and Cheika would do. Fix the basics
2 Darragh Ó Sé: Cork and Donegal went out with the wrong attitude
3 Simon Easterby admits Ireland may need to take new line on maul
4 Ed Byrne, Johnny Sexton and Rob Henshaw to miss clash with Georgia
5 Kevin McStay: Maybe a knockout All-Ireland Championship is the long-term solution?
Real news has value SUBSCRIBE
Crossword Get access to over 6,000 interactive crosswords