Round-up: Newcastle win at Leicester to pull further from the mire 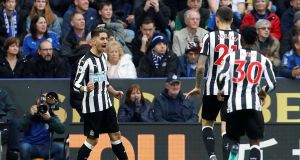 Newcastle took a giant leap towards Premier League survival with a 2-1 victory at Leicester.

Jonjo Shelvey and Ayoze Perez scored fine goals to put the visitors in control but Jamie Vardy reduced the deficit late on to set up a tense finale at the King Power Stadium.

Rafael Benitez’s side held on though for a third straight win while Leicester’s outside hopes of qualifying for the Europa League were dealt a severe blow and they are now without a home win since January 20th.

Early pressure from Newcastle saw them win three corners, the second of which brought a good save from Kasper Schmeichel. Kenedy’s inswinging kick was flicked on at the near post by Perez and the Leicester goalkeeper got down smartly to push his header behind.

Newcastle continued to look the most threatening team and they took the lead after 18 minutes following a swift counter-attack. Perez pulled the ball back for Shelvey, who wrong-footed two defenders with a lovely dummy before guiding a shot into the bottom corner of the net.

It was Newcastle who got the second goal of the match in the 75th minute after a defensive blunder from Puel’s team.

Central-backs Wes Morgan and Maguire hesitated over a long punt down field, prompting Schmeichel to think about coming out. The confusion allowed Perez to lob the ball over the goalkeeper and into the unguarded net. It was a brilliantly-taken finish by the Spaniard.

Leicester made the visitors sweat late on for the points, however, as Vardy, who had not had a sniff all afternoon, pulled a goal back with six minutes left.

Okazki’s header from Demarai Gray’s cross beat Martin Dubravka but Vardy was on hand to turn the ball in from virtually on the line.

Newcastle hung on for the win, though, to take a giant leap towards survival.

Norway striker Joshua King scored an opportunist late goal as Bournemouth twice came from behind to earn a 2-2 home draw with Crystal Palace in an electrifying Premier League clash on Saturday.

Superb goals from Serbia midfielder Luka Milivojevic and Wilfried Zaha twice put relegation-battling Palace in the driving seat but the home side hit back through second half substitutes Lys Mousset and King.

Milivojevic celebrated his 27th birthday with a brilliant free kick and livewire Zaha made it 2-1 with a dazzling piece of individual skill after Mousset had levelled with a fine shot from 20 metres.

But Palace, who have made it a habit to concede late goals, could not hold on and King salvaged a point for Bournemouth from point-blank range after a corner was headed into his path in the 89th minute.

Ten-man Brighton blew the opportunity to take a giant step towards Premier League safety by squandering a hatful of chances to draw 1-1 with Huddersfield.

Davy Propper spurned Brighton’s first gilt-edged opening with just a minute on the clock, and then saw red in the final quarter for a studs-up tackle on Jonathan Hogg.

Chris Hughton’s Brighton slipped to a fourth game without a win, with one nervy eye always trained on a season-ending run of facing Manchester United, Manchester City and Liverpool in just nine days.

Darren Moore successfully ended the eight-game losing streak bequeathed to him by West Brom predecessor Alan Pardew, but a 1-1 draw with Swansea appeared to represent another nail in the club’s Premier League coffin.

For the 21 minutes between Jay Rodriguez’s poached opener and Tammy Abraham’s headed equaliser it seemed Moore might be on course for a fairytale start to life in the Hawthorns dugout.

Rodriguez’s point-blank finish early in the second half got the home fans singing, slowly erasing the worst memories of Pardew’s ill-fated reign, but the bonhomie was punctured when Jake Livermore allowed Abraham to climb above him and nod in Sam Clucas’ corner.

The Baggies have one foot in the Championship, 11 points adrift with five to play, and may yet be joined by their opponents who can consider themselves lucky to leave with anything after a deeply unimpressive outing.

Burnley continued their pursuit of European football as two goals in three second-half minutes gave them a 2-1 Premier League win at Watford.

The Clarets’ hopes of finishing in sixth place looked like faltering at Vicarage Road after Roberto Pereyra put the Hornets in front on the hour mark, but quickfire replies from Sam Vokes — seconds after coming off the bench — and Jack Cork saw Sean Dyche’s men close the gap on Arsenal to two points.

It was also their fourth successive top-flight win, the first time they have achieved such a feat since 1968, and a seventh away success of what has been a memorable campaign.

It is a different story for Watford, who were the better team until Vokes’ equaliser, as they lost for a third time in four matches, and though still nine points above the relegation zone they should not encounter any late-season drama.