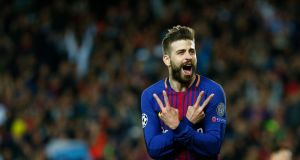 Roma scored three at the Camp Nou but their chances of reaching a first Champions League semi-final since 1984 are slim. This time it was not Lionel Messi who scored and while Luis Suárez ended his year-long wait for a Champions League goal, it was two own goals that set Barcelona on course for a first-leg victory.

That it is not decisive is due to Edin Dzeko’s late strike – this time at the right end. Daniele De Rossi and Kostas Manolas put past their own goalkeeper before Gerard Piqué added the third. Dzeko appeared to have changed the nature of the tie but Suárez added a fourth that should be sufficient.

Rome awaits but Barcelona were left feeling that they will progress to semi-finals. Roma were left wondering what might have been. At the end, there was applause from the Camp Nou and satisfaction too. It had ended with the scoreline many imagined, and the home side had carried the weight of this match, although the route they took there was unexpected. Posters went up around the city welcoming the Romans and warning them that 100,000 gladiators awaited. They were neither so many nor so fierce, but they were victorious.

Eusebio Di Francesco had said that his team would remain true to their footballing identity, playing with “happiness”. “Why not be optimistic?” he had asked, and even without Radja Nainggolan Roma began on the front foot, the ball dropping dangerously in the Barcelona area inside the first minute.

Barcelona were uneasy, hurried, the ball given away easily, and nine minutes in Roma appealed for a penalty when Dzeko was bundled over. He may have made the most of it but the challenge from behind was clumsy at best from Nélson Semedo. He had been included to give the defensive security Ernesto Valverde wanted as he sought not just a victory but a clean sheet.

Bit by bit Barcelona took control, although there was a momentary pause when yellow balloons floated on to the pitch amid chants of “freedom!”. Messi’s shot was pushed away, Suárez’s effort was deflected over and then Ivan Rakitic hit the post. Alisson Becker dived to push away Messi’s shot just before the half hour.

The pressure was building, Messi running at Roma, although a clear route through an accumulation of bodies was proving elusive. Until, that is, Barcelona scored. Andrés Iniesta returned Messi’s swift ball. De Rossi stretched out a leg to cut out the pass but guided it into the corner. It was the fourth own goal Barcelona had “scored” in the competition – the highest total any team have had for 15 years – and it felt different.

Messi seemed to get away a minute later but Manolas got his body across him. The appeal for a penalty was a little timid but when Roma went up the other end it was far more vociferous. Aleksandar Kolarov’s excellent ball found Lorenzo Pellegrini and as he darted forward Samuel Umtiti tripped him. He fell into the area but the free-kick was given on the edge. Pellegrini hit the shot against the wall. Now, the stadium found its voice, as if the threat to Barça had awoken the home fans.

The first half ended with Messi hitting a free-kick into the wall and seeing another shot blocked; the second began with Roma missing a wonderful opportunity, the best of the game. Six yards out, arriving at the far post, Diego Perotti headed wide. Alisson spilled Jordi Alba’s shot soon after but it was Barcelona who looked ill at ease, Umtiti almost caught by Alessandro Florenzi as he tried to control close to goal. The ball had gone out before it bounced back off the post but it served as another warning and Camp Nou urged their team to respond.

Fed by Iniesta, Messi stepped away from Federico Fazio but hit straight at Alisson. Then the second goal came and, like the first, it was a little fortunate. Rakitic combined with Messi on the right and pulled back a superb ball across the six-yard box. The ball hit Manolas, hit the post, bounced back through the legs of Umititi, diving in, hit Manolas on the knee and rebounded into the net.

Barcelona had been given their second; four minutes later they got one of their own when Messi’s neat pass with the outside of his boot found Suárez, whose shot was pushed away by Alisson, straight into the path of the defender Piqué, standing a couple of yards out.

Roma needed a goal to give themselves a chance, and they did eventually get it. Marc-André ter Stegen got himself into trouble then got himself out of it again, losing the ball as he tried to turn on it deep into his own area. Stephan El Shaarawy took it from him and clipped it into area. Gregoire Defrel controlled by the penalty spot and struck goalwards, onely to find Ter Stegen flying back to stop him. There was applause and apologies too. A moment later, they were clapping again when Ter Stegen took flight to push away a curling effort from Perotti. And then, soon after that, they were caught. Perotti delivered for Dzeko to control and score. Roma had one of their own at last but seven minutes later, Suárez made it four.