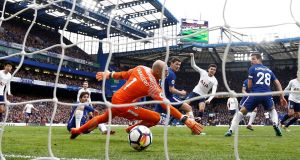 Alli followed up being dropped for England’s 1-1 draw with Italy by netting twice as Tottenham secured a first win at Stamford Bridge since 1990 in Sunday’s Premier League clash.

Pochettino insisted Spurs have achieved “nothing” despite opening up an eight-point gap on rivals Chelsea that all but cements Tottenham’s bid for a fourth-place finish that will secure Champions League qualification.

The Spurs boss conceded Alli had faced a “tough period” in not featuring for England against Italy – but insisted he never doubted the 21-year-old’s ability to bounce back.

“Dele is not going to be affected if he plays or doesn’t play,” said Pochettino.

“He’s got a great character, he’s so strong, he’s a fighter; very competitive. He’s not going to be affected, but then we have to help him.

“If he doesn’t play for the international team he needs to fight and win trust and confidence again.

“I’m very, very pleased, it was a tough period for him: but for me I have no doubt over his talent, his character, and I am so happy for him because he deserved it, worked hard.

We believe in him

“He’s a great talent, only 21, and sometimes we lose focus on that. Sometimes the expectation is too much, and pressure on his shoulders.

“He doesn’t need to show anything to us, because we trust and believe in him.”

Spurs’s first win at Stamford Bridge in 31 matches in all competitions has surely inched Pochettino’s men over the line for the Premier League’s final Champions League qualification berth.

The former Southampton manager insisted Spurs cannot take anything for granted however, despite boasting an eight-point advantage over Chelsea with seven matches to play.

“There is still a long way to the end, we need to be focused and try now to prepare for the next game, it will be tough against Stoke,” said Pochettino.

“So we must focus and try to work hard. I think there is still nothing achieved, and I’m sure it will be difficult to finish in the top four.

“We need to fight, our mentality is that we must be ready for every game, and then the FA Cup semi-final.”

Alvaro Morata put Chelsea into an early lead with his first league goal since St Stephen’s Day, but after that Chelsea were overwhelmed by Christian Eriksen’s sublime long-range strike and a savvy double from Alli.

Refused to give up

Alli claimed he had silenced some if not all of his critics.

He told Sky Sports: “I am sure people will still be disappointed with the way I have played, they will have plenty to say.”

Chelsea boss Antonio Conte refused to give up the fight for Champions League qualification, but admitted his side have everything to do to reverse their current predicament.

Asked if any chance of overhauling Tottenham had now gone, Conte said: “I don’t know. I don’t know.

“In the one hand we must be realistic and understand that the teams ahead of us are going very fast.

“Today we had a great chance to close the gap with Tottenham, and we lost this chance.

“On the other hand we have to know that until the end we will try to do our best, in these seven games to do everything to try to take our place in the Champions League. But it won’t be easy, we know this.”