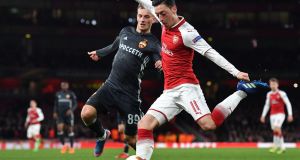 Arsene Wenger saw his side put one foot into the semi-finals of the Europa League with a convincing win over CSKA Moscow before hailing the brilliance of Mesut Ozil.

The Germany international ran the show for the Gunners as Aaron Ramsey and Alexandre Lacazette helped themselves to two goals apiece in a 4-1 victory.

Ramsey opened the scoring before Ozil was fouled inside the box, with Lacazette turning home the resulting penalty.

Ozil then provided the assist for Ramsey to score a stunning third before he laid on Lacazette’s second as the game was wrapped up before the interval.

With the second leg to come in Moscow next week, Wenger refused to put his side into the hat for the last four — but he was full of praise for Ozil.

“Of course he enjoys it,” Wenger said of the former Real Madrid man.

“And I hope you enjoy it because we see a great football player. When you love football, that’s what you want to see.

“We scored some great goals in the first half and at half-time the target was not to concede any more and, if possible, add another one.

“On the other hand, it will help us to focus completely in the second game and not think it’s job done, we know it’s not over. We have to go there with that right focus and try to win the game.”

There were a couple of negatives for Wenger, who revealed goalkeeper David Ospina is set for a spell on the sidelines after injuring his ankle in training before he saw Henrikh Mkhitaryan limp off hurt.

“The scan today was reassuring, he will be out for two to three weeks,” Wenger replied when asked about Ospina.

“Yesterday we were scared it was a very serious injury but the scan was reassuring. (Mkhitaryan) has a knee problem.

“We don’t know how bad it is, we have to assess it tomorrow morning. He will certainly be out for Sunday.”

CSKA manager Viktor Goncharenko admitted his side — who had briefly equalised courtesy of a stunning Aleksandr Golovin free-kick — were outclassed in London.

“They outperformed us greatly but I’m not disappointed,” he said.

“Of course it’s a very bad result for us but we understood who is playing against us.”

Asked about the second leg, Goncharenko said he was only thinking about Monday’s derby with Dinamo Moscow in the Russian Premier League.

“We can’t jump stages. We shouldn’t speak about the second leg of Arsenal now,” he added.

“A very important match against Dinamo is ahead of us so let’s think about this upcoming match and we’re going to concentrate on it.”

1 Waterford turn Kilkenny upside down and inside out
2 Jim McGuinness: There is a way to save championship and make it competitive
3 Waterford’s frenzied waves of attacks too much for Kilkenny
4 Sordid murder of hurling brothers still resonates in south Galway
5 Klopp furious as injuries mount and VAR decisions prove costly
Real news has value SUBSCRIBE
Crossword Get access to over 6,000 interactive crosswords