‘I’m aware that I’m joining one of the great, traditional clubs of English football’ 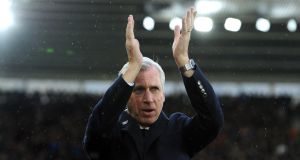 The 56-year-old, who has been out of work since being sacked by Crystal Palace last December, has signed a contract running until 2020 at the Hawthorns after holding talks with the club’s hierarchy last week. He will take charge for Saturday’s home match against his previous team, with Gary Megson having performed caretaker duties for the past two matches against Tottenham and Newcastle.

“I’m thrilled with the opportunity Albion have provided and looking forward to getting to work with what I consider to be a talented group of players,” Pardew told the club’s website.

“The immediate challenge will be to get the results we need to pull ourselves up the table. But I’m aware that while I’m joining one of the great, traditional clubs of English football, it is one determined to go forward in the Premier League. It’s an exciting opportunity to play a part in that ambition.”

Pulis was sacked last week after a run of four defeats left West Brom in 17th place. Pardew, who has previously managed West Ham and Newcastle in the Premier League, takes over having seen Megson gain a point against Spurs on Saturday before surrendering a 2-0 lead against Newcastle on Tuesday to draw 2-2.

He will be tasked with steering West Brom away from the bottom three, with the Chinese owner, Guochaun Lai, keen to maintain the club’s eight-year stay in the top flight. Pardew guided Palace to 10th in the 2014-15 season for their best Premier League finish.

He was named LMA Manager of the Year in 2012 after he guided Newcastle to fifth place in the Premier League.

West Brom’s chairman, John Williams, said: “Alan brings the experience of more than 300 Premier League games and the kind of dynamic leadership from which our club can benefit. We were impressed with what he had to say and what he has to offer and we are looking forward to an exciting new era under his charge.”

Williams confirmed that Megson, who was brought in by Pulis, had left the club.

800 — Matches as a full-time manager after starting his career in the dugout in 1999 with Reading.

337 — Games won during his managerial career.

276 — Games lost during his managerial career.

2 — FA Cup final defeats as a manager, having lost in the 2006 final with West Ham and been beaten by Manchester United in 2016 with Crystal Palace.

1 — FA Cup final defeat as a player, losing the 1990 final to Manchester United also with Palace.

6 — Games won in his final 36 matches at Crystal Palace, a run which cost him his last job.

3 — Promotions, once as a player with Palace in 1989 and two as a manager after taking West Ham to the Premier League in 2005 and guiding Reading to the Championship in 2002.

475 — Appearances during an 11-year professional career for Palace, Charlton, Tottenham and Barnet.

13 — Winless games for West Brom so far ahead of Saturday’s visit of Palace.

2 — Individual managerial honours after winning the LMA and Premier League Manager of the Year in 2012.