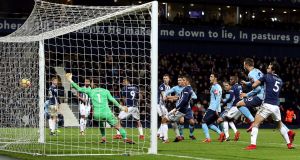 Fleetingly it seemed as if joy had returned to The Hawthorns, as goals by Hal Robson-Kanu and Sam Field put West Bromwich Albion on course for their first victory since August. But instead the home side ended up clinging on for a point, as their two-goal lead was whittled away by a Newcastle United side also in urgent need of a change of form.

Ciaran Clark cut the deficit by heading home in the 59th minute and then, six minutes from time, Jonny Evans deflected a free-kick by Matt Ritchie into his own goal. Newcastle had avoided a fifth straight defeat and Albion continue to search for a win, as well as a new manager.

Before the first match here since Tony Pulis was put out of Albion’s misery, many among the Hawthorns faithful no doubt discussed the expected appointment of Alan Pardew. But talks with the former Crystal Palace and West Ham United manager have not concluded, so Gary Megson remained at the helm for the visit of another of Pardew’s former clubs. Megson made only one change to the lineup that had started Saturday’s encouraging 1-1 draw away to Tottenham Hotspur, Robson-Kanu replacing Jay Rodriguez up front. Megson may suspect that his days as the main man in the dugout are numbered but he could at least use the visit of Newcastle to try to give another demonstration of his ability and start lifting the Baggies up the table.

Rafael Benítez’s position seems about as secure as he wants it to be but he, too, craved a win here and went into the game with no good recent displays to build on. Newcastle’s performance during Saturday’s 3-0 home defeat by Watford led Benítez to make drastic alterations to his lineup. Joselu kept his place as the lone striker despite seldom threatening in recent outings but Jonjo Shelvey was dropped, while the four other changes included the reintroduction of Karl Darlow as goalkeeper in place of Rob Elliot. Darlow’s only previous appearance this season came in August’s 3-2 defeat by Nottingham Forest in the Carabao Cup. If Megson managed to grant the home fans’ wishes and make the team more attacking than they were under Pulis, then Darlow would surely be in for a test.

Or maybe not. Darlow’s return to action was a misnomer for the first 18 minutes, when no action at all was required from the visitors’ goalkeeper. Newcastle, enterprising if blunt, made the better start. Then, in the 19th minute, Darlow was involved in play, clasping a dangerous cross by Matt Phillips. But one minute later the goalkeeper was back to being motionless, this time watching helplessly as a sudden 25-yard shot by Salomón Rondón sailed past him and struck the top of the bar.

Other than that the main moments of quality in the first half came from Field, the elegant 19-year-old midfielder whom Megson again included instead of Grzegorz Krychowiak, the expensive loanee from Paris Saint-Germain. Field made hay with his passing but it was a delivery from a more surprising source – Ahmed Hegazi – that led to a looping header by Robson-Kanu from seven yards in the 38th minute. Darlow back-pedalled frantically to catch it.

Robson-Kanu gave the goalkeeper no chance on the stroke of half-time, though, when he leapt to meet a cross by Kieran Gibbs and powered a downward header into the net from close range.

With Albion looking liberated, there was no sign of menace from the visitors until the 51st minute, when Ayoze Pérez caught a dropping ball with a sumptuous volley from 20 yards. Foster did not waste any time in getting down to save it.

Five minutes later the home crowd jumped to their feet to cheer a volley that did find the net. The scorer could not have been more popular, Field finding acres of space beyond the back post to guide the ball calmly into the net after a cross by Phillips.

“He’s one of our own,” crowed the home fans but their singing was curtailed three minutes later when Newcastle halved the lead. Clark gave the visitors new hope by heading a cross by Ritchie into the net from close range, before Evans’ misfortune brought the teams level. – Guardian service