While the Hammers remain in the bottom three, there were some encouraging signs 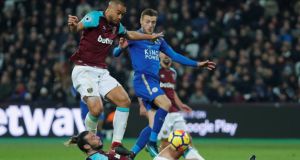 By the end David Moyes could reflect on his first taste of the London Stadium with a measure of fondness. In the cold light of day the final analysis may show this was a squandered opportunity for West Ham bearing in mind they remain in the bottom three, winless in two months, and have a daunting run of fixtures before Christmas.

Yet it was the night when the crowd at the strange, lopsided place that Moyes will call home for at least the next six months resisted the temptation to protest against the people in the directors’ box and chose instead to rally round their new manager, delivering an impressive burst of support for the new man in the dugout during the second half. There was no winning goal, but West Ham showed enough heart and character to suggest they can win this relegation battle, fighting back after Marc Albrighton’s early opener to snatch a draw against Leicester City thanks to Cheikhou Kouyaté’s equaliser.

The first goal of a new era in east London certainly arrived at a good time for West Ham. Despite beginning with the knowledge they needed a committed and cohesive performance to keep a lid on the growing angst and anger within their support after months of stagnation, they had toiled long periods before Kouyate’s equaliser on the stroke of half-time and it had been alarming in the extreme for Moyes to hear the first show of dissent in the stands flare inside the opening 15 minutes.

The absence of any sense of urgency or intensity from the home side during the game’s formative stages was startling, albeit familiar; West Ham could take great encouragement from the way they responded to adversity bearing in mind the atmosphere threatened to grow toxic after Leicester scored from their first fluid move.

Leicester’s attack had pace in abundance and it always felt like that might prove problematic for West Ham’s leaden, leaky defence. Riyad Mahrez flitted around menacingly in a free role, Demarai Gray knew that he could comfortably outstrip Pablo Zabaleta in a race and Jamie Vardy relished the opportunity to test Winston Reid. Vardy was dangerous whenever he broke down the left, flashing one inviting centre across the face of goal and bending one effort just wide, and the striker’s unselfish, wily movement allowed Albrighton to break the deadlock after eight minutes.

West Ham failed either to anticipate the danger or take preventative action when it became obvious. There was not enough pressure on the ball as Leicester swiftly shuffled it around in the middle and Mahrez and Wilfried Ndidi combined to release Vardy. Reid was pulled out of position and Angelo Ogbonna will wince at the way the ensuing cutback went through his legs before reaching Albrighton, whose clipped finish deceived the flatfooted Joe Hart.

For a while the mood was ugly as the tension ate away at West Ham’s belief. Hart scuffed a clearance, Gray was allowed to do as he pleased in midfield and Manuel Lanzini was rebuked for dithering on the edge of the Leicester box. It seemed Moyes’s call for unity before kick-off had fallen on deaf ears.

Gradually, though, the crowd started to warm to the idea of standing with their team and that backing had an invigorating effect on West Ham. Though they remained stodgy in open play, with Andy Carroll struggling to make an impact up front, they had enjoyed a couple of threatening moments from set-pieces before Kouyate headed in Lanzini’s corner in the 45th minute.

Beaten by Watford in his first game, Moyes had expressed surprise at the mutinous chants from the away end at Vicarage Road, claiming that he was ignorant about the politics at his new club. Yet it is hardly a secret West Ham’s fans have a deep mistrust of the board and there had been plenty of whispers before this game they were verging on outright revolt because of all the spin and excuses from on high.

There was a realisation, though, that there was a way of channelling that anger into something more productive and West Ham dominated for long periods after the unmarked Kouyaté, who was guilty of a couple of glaring misses against Watford, saw his header flick off Danny Simpson and past Kasper Schmeichel.

Arthur Masuaku provided thrust on the left wing, Marko Arnautovic’s improved display was epitomised by a saving tackle on Vardy and West Ham pressed energetically enough in the second half to make Leicester make a defensive change with 20 minutes left, bringing on Ben Chilwell for Mahrez.

In the end, West Ham lacked the clarity of thought that might have brought them a second goal. Leicester were never under siege at any point and, while André Ayew was close with a late overhead kick, there was no need for any heroics from Schmeichel. For Moyes, though, the first bricks have been laid. – Guardian service