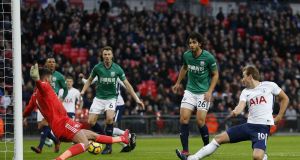 Gary Megson made his case for a longer stay as West Brom manager as his resilient side held Tottenham to a 1-1 draw at Wembley.

Salomon Rondon gave the visitors a surprise early lead at the national stadium and while Harry Kane equalised 16 minutes from time, West Brom stood firm for a gutsy draw.

The Baggies fans chanted Megson’s name here and it was they who were cheering at the final whistle, having watched their team end a run of four consecutive defeats. Megson insists he has not considered becoming the club’s permament successor to Tony Pulis but with home games against Newcastle and Crystal Palace up next, he may be able to promote his cause even further.

Tottenham’s ruthlessness against the league’s lower sides underpinned their title challenge last term but they have now dropped points at home to Burnley, Swansea and West Brom. Mauricio Pochettino’s men had 73 per cent possession and 20 shots to their opponents’ five but in truth they created too few clear-cut chances.

They now trail Manchester City by 10 points, with the league leaders still to face Huddersfield on Sunday. West Brom moved out of the relegation zone and into 17th.

West Brom needed only four minutes to capitalise as Dele Alli was dispossessed by Jake Livermore, who quickly freed Rondon in behind. Davinson Sanchez looked to have marshalled his opponent away from goal but Rondon persisted, his dribbling shot catching Hugo Lloris by surprise and rolling inside the far post.

From there it was all Spurs but they struggled to break down the West Brom wall. They huffed and puffed until thje 74th minute, when they finally equalised. Alli dinked a cross into the near post, where Kane nipped in to poke home his ninth league goal of the season.

With 16 minutes left, Spurs now fancied a winner and they nearly had it when Kane and Son both looked set to meet Kieran Trippier’s cross but the ball span over the bar. Foster spilled a Kane shot but gathered just ahead of the onrushing Alli and the best chance actually fell to West Brom, only for Rondon to feather wide from close range when he should have found the net.

Crystal Palace secured a dramatic and vital victory in their battle against relegation when Mamadou Sakho’s stoppage-time goal earned them a 2-1 win over Stoke.

Visiting captain Ryan Shawcross had sent team-mate Xherdan Shaqiri’s goal-bound cross wide from in front of goal shortly before Sakho tapped in to seal their comeback from a goal down following Ruben Loftus-Cheek’s earlier finish. It had been the impressive Shaqiri who had given 15th-placed Stoke the lead.

It took until the 24th minute for either side to threaten, and when Stoke did, when Shaqiri struck after been played through by Darren Fletcher, Hennessey made an important save after a deflection from Jeffrey Schlupp.

Sensing his side had lacked a focal point and could not afford to drop two further points, Hodgson replaced McArthur with Christian Benteke for the second half and moved Andros Townsend out to the left wing. The striker had been rusty when returning from injury against Everton, and when their next chance came to him after a through-ball from Yohan Cabaye, from a narrow angle he struck first time into the side netting.

Any regret he felt at doing so was almost instantly intensified when, in the 53rd minute, Shaqiri then collected possession in midfield, ran to the edge of Palace’s area, found space, and curled with his left foot into the bottom right corner.

If the home supporters quickly grew nervous at the prospect of another costly defeat, their team remained composed and within three minutes found an equalising goal. Townsend sent an inswinging cross into the area from the left, and after it had evaded Stoke’s defence en route to the back post, the unchallenged Loftus-Cheek calmly and routinely tapped in.

Palace appeared fortunate to be nearing a point after Shawcross inexplicably managed to turn Shaqiri’s cross wide when almost on the goal-line and with it already appearing destined for the back of the net. Benteke’s lethargy in the final third meant they also looked unlikely goalscorers, but deep into stoppage time, Zaha’s cross from the left found Cabaye in the area, and after the midfielder struck the post, stand-in captain tapped in for victory.

Marco Silva got the better of Rafael Benitez in spectacular style as Watford stormed to Premier League victory at Newcastle. The Portuguese correctly identified the Magpies’ Achilles heel - right-back DeAndre Yedlin’s tendency to abandon his defensive duties to provide an extra attacking option - and his players exploited it in brutal fashion to cruise to a 3-0 win.

All three goals came down that wing, with Will Hughes converting Marin Zeegelaar’s 19th-minute cross and Yedlin deflecting home another before the break before Andre Gray - a man Benitez wanted to sign during the summer - finished from close range from Richarlison’s ball in.

The Hornets also passed up a series of other opportunities in front of a largely frustrated crowd of 52,188 as they condemned the Magpies to a fourth successive defeat and exposed the lack of genuine quality available to Benitez, whose hopes of reaching 20 points by the end of the year look forlorn.

With Tyneside once again gripped by takeover talk after Amanda Staveley’s PCP Capital Partners tabled an initial offer, Benitez insisted in the run-up to the game that he would concentrate only on what he could control. But the alarm bells were ringing long before the half-time whistle ended a torrid first 45 minutes for the home side, whose flaws were cruelly exposed by the rampant visitors.

Keeper Rob Elliot had to make an important save to deny Richarlison on the break, but the visitors went ahead with 19 minutes played as the Magpies were caught sleeping. Zeegelaar was given time and space on the left to pick out Hughes inside the box and his finish was unerring.

Newcastle were punished once again in stoppage time when Zeegelaar’s cross clipped Yedlin and beat Elliot at his near post. Benitez’s men were in tatters as the back, with the visitors looking capable of adding to their tally at will as they marauded repeatedly down their left flank, and they struck once again with 62 minutes gone when Richarlison was allowed to picked out Gray at the far post and he made no mistake.

Swansea stopped the rot with a scoreless draw against Bournemouth but failed to ease the pressure on head coach Paul Clement. Four successive defeats had dropped Swansea into the Premier League relegation zone and left Clement facing awkward questions over his future.

Those questions might still remain after Bournemouth kept a third successive clean sheet, but at least Clement saw an improved Swansea performance which should have brought all three points.

Swansea still laboured to create chances but there was a greater intensity about their play than in recent weeks. And Clement must have felt his side had won it when substitute Leroy Fer burst through the Cherries’ defence seven minutes from time.

Fer forced Asmir Begovic into his first save of the game and then placed the rebound wide when it seemed simpler to score. Swansea also had a penalty appeal turned down late when Adam Smith appeared to take away the standing foot of Tammy Abraham, although contact might just have been outside the area.

There was a lively start as Joshua King shrugged off the challenge of Roque Mesa and crossed for Marc Pugh to produce a tame effort. Swansea’s instant response was for Jordan Ayew to wriggle free and strike the crossbar from a tight angle.

Swansea improved as the first half wore on with an increasing understanding between Bony and Sanches offering them real hope. Sanches volleyed over after Bony had scrapped for a cross and further good work by the pair ended with Ake bravely blocking Ayew’s goalbound attempt.

Jordon Ibe tested Fabianski at the base of his post as tempers threatened to boil over. Ibe and Ki Sung-yueng were booked after a spot of shoving which saw referee Attwell caught in the middle before Charlie Daniels almost produced a Bournemouth sucker punch.

1 Sordid murder of hurling brothers still resonates in south Galway
2 Ireland 23 Georgia 10: How the Irish players rated
3 Ireland grind their way to grisly win over Georgia
4 No fireworks but Limerick get the job done against Galway
5 Ireland’s autumn of discontent continues with abysmal Georgia showing
Real news has value SUBSCRIBE