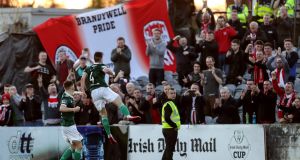 Eoin Toal’s first goal of the season secured Derry City a share of the spoils against Dundalk at Oriel Park on Friday night.

Dundalk started brightly and made the breakthrough in the eighth minute when John Mountney’s cross fell Kindly for Robbie Benson who arrived right on cue to open the scoring.

Dundalk continued to pose all of the questions and Ger Doherty denied Patrick Hoban in the 14th minute after the Lilywhites striker broke clear on the inside right channel.

The Derry captain kept his side in the game with another good stop just shy of the half hour. Dane Massey’s cross skipped off Hoban and landed perfectly for Mountney but Doherty was there to close the angle and keep the header out.

A stop start couple of minutes followed and the visitors - who had to contend with the loss of key strikers Rory Patterson and Ronan Hale - drew level against the run of play with four minutes remaining in the half.

Aaron McEneff was bundled over in the box by Dan Cleary and the midfielder became the first player to beat Gary Rogers this season by converting from the spot.

It looked like that would send the teams in level at the break but Dundalk edged back in front with 45 minutes played when Sean Gannon’s cross caught Darren Cole napping at the back post and Michael Duffy was there to profit against his hometown club.

The second half was less than two minutes old when Toal bundled home the equaliser after Gary Rogers could only push a Ronan Curtis header away.

Both managers turned to their bench in a bid to win the game and Duffy almost brought the house down in the 81st minute with a curler from the left that drifted the wrong side of the upright.

Gavin Peers was given his marching orders with three minutes to play for a second bookable offence and although Dundalk tried to force it, the visitors held firm to take a well earned point back to Foyleside.

Despite utterly dominating the first half and leading form Graham Burke’s goal, Rovers allowed Limerick - on the anniversary of their league title win of 38 years ago - back into the game in the second half.

And the Shannonsiders duly took it on 86 minutes.

Kilian Cantwell played Morrissey in behind and the striker powered a shot across Kevin Horgan to the net.

Despite then having midfielder Cian Coleman shown a straight red card for a bad foul on Aaron Bolger right on 90 minutes, Limerick held on for a big point.

Dominant from the off, Rovers, with three changes form their defeat in Bray, were deservedly in front on 15 minute

A weak defensive header dropped for Burke 25 yards out and the midfielder rifled a powerful low drive in off a post for his eighth goal of the season.

Goalkeeper Brendan Clarke kept limerick in it until the break with a string of saves, the pick of them when tipping away a Lee Grace header.

Limerick came out for the second half with more purpose and might have been level on 57 minutes.

Unmarked in the area, Morrissey should have done far better than nod Shaun Kelly’s cross straight into the arms of Horgan before making amends with his late leveller.

Waterford rose to third place by putting an end to their losing streak with victory over basement side Bray Wanderers.

On the back of two successive defeats, and four red cards, the Blues needed a win and Faysel Kasmi’s brace along with Derek Daly’s goal finished off the plucky Seagulls at the RSC.

Bray, fresh from their first victory in 10 matches over Shamrock Rovers, were desperately unlucky not to be ahead at the break but Waterford’s class eventually told.

After Izzy Akinade struck the post on either side of the break, Kasmi forced the breakthrough eight minutes into the second half. The Belgian-born winger curled his left-footed shot beyond Aaron Dillon after his first effort was blocked by Hugh Douglas.

Kasmi played a part in the second nine minutes from the end, teeing up Derek Daly to find the net with a deflected shot before he grabbed a third in stoppage time.