Rangers fail to put Progrès Niederkorn away for good at Ibrox 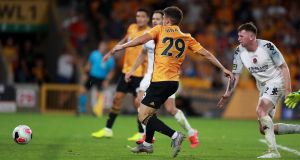 A sense of history enveloped Molineux as Wolves returned to European football for the first time since they narrowly lost to PSV Eindhoven in the 1980/81 Uefa Cup but their immediate future in the Europa League looked vulnerable until Ruben Vinagre scored with the penultimate kick of the game to add to Diogo Jota’s first-half goal.

Crusaders, who finished fourth in the Irish Premiership last season, performed stoutly and with good organisation throughout as Wolves laboured somewhat on their return from action in China last weekend.

The effects of the hottest July day on record should have played into Wolves’ hands more, as the Irish Cup winners had to run about chasing the ball, but the Premier League side looked set to visit Belfast next Thursday with only a one-goal lead until Sean O’Neill’s blunder right at the end handed Vinagre his goal.

João Moutinho swung in the umpteenth Wolves cross into a packed penalty area as the game ticked into its 93rd minute only for O’Neill to fumble the ball and allow Vinagre to tap home into an empty net.

Back in 1980, the floodlights had gone out as Mel Eves scored but Wolves could not cancel out PSV’s 3-1 first-leg lead. The torch burns brightly for Wolves again now, the most indeed since they won the League Cup and finished sixth back then, and now they should have enough class and professionalism to reach a third qualifying round against Armenian or Czech opposition in Pyunik or Jablonec.

There was a vibrant sense of the old and the new here before kick-off. Fresh from winning the Premier League Asia Trophy, beating Manchester City in a penalty shoot-out in China on Saturday, Wolves beamed highlights of their historic 1950s triumphs over the likes of Spartak Moscow and Honved on the big screens.

It may be 39 years since their last proper European involvement – if the briefly resuscitated second-tier Anglo-Italian Cup of the 1990s can be disregarded – but Wolves can lay claim to being the pioneers of the Champions League after their famous floodlit friendlies midway through the last century.

In an era when England were humbled by Hungary, Billy Wright, captain of club and country, had a chance to atone against Ferenc Puskas who had sold him such an outrageous dummy when scoring one of six goals conceded at Wembley in 1953 that Geoffrey Green wrote in The Times: “Wright charged in like a fire engine going in the wrong direction for the blaze.”

Wolves went 2-0 down to Honved before reviving to win 3-2 in December 1954 and be acclaimed as the champions of the world in the English media before the European Cup was conceived the following season.

After finishing seventh in the Premier League in May and reaching Wembley for an FA Cup semi-final in which they led Watford 2-0 with 11 minutes remaining, Wolves look set fair to challenge towards the upper echelons of the English game this season.

Nuno Espírito Santo has not bulked his squad up for Europa League action yet, with central defender Jesús Vallejo close to signing on loan from Real Madrid as a first summer signing, and Wolves fielded a familiar line-up.

They led only by Jota’s goal at half-time, the Portugal forward striking a clean half-volley from Adama Traoré’s right-wing centre eight minutes before the interval.

Crusaders defended valiantly throughout the opening period, often getting 11 men behind the ball as Rúben Neves kept prompting Wolves attacks. Traoré, playing at right wing back with Matt Doherty injured, was a constant source of pace, trickery and delivery as Wolves looked to capitalise on the heat by moving the ball around swiftly.

The temperature had dropped to a balmy 28C by the second half but Crusaders were still made to sweat as Wolves played keep-ball in the final third.

Stephen Baxter’s team had restricted Fulham to a 3-1 first-leg defeat on the previous occasion they had played English opposition in this competition in 2011, losing the return 4-0 at Craven Cottage, and they stayed in this tie as Morgan Gibbs-White kept missing the target.

The England Under-21 attacking midfielder, playing up front as Raul Jiménez had only returned from international duty on Monday, scored his first goal for Wolves’ first team in last week’s 4-0 defeat of Newcastle United in China. He dragged one shot wide, when sent in by Leo Dendoncker, blasted a fine effort just over and then headed just wide around the hour mark.

Rangers hope a 2-0 lead will be enough to exorcise the Europa League ghosts of 2017 after missing the chance to kill off old foes Progrès Niederkorn at the first attempt. The part-timers from Luxembourg dished out one of the biggest upsets in Rangers’ history when they knocked Pedro Caixinha’s side out of the competition two years ago.

Yet a missed a second-half penalty from James Tavernier was among a host of spurned opportunities that ensure the Light Blues still have work to do next Thursday.

With the score goalless heading into first-half added time, Serbia goalkeeper Vladimir Stojkovic appeared to take a swing at Nomads’ captain George Horan as they challenged for a cross.

Morrison felt it should have been a red card and a penalty but they received neither from Slovakian official Michal Ocenas and went on to lose 1-0 to Aleksandar Scekic’s volley, leaving the Welsh Premier League side with a tough task in Belgrade next week.

“I thought the referee had an incredibly poor night,” Morrison said after the game at Rhyl’s Belle Vue ground. – Guardian

1 Shock at golf clubs as sport faces shutdown in Level 5
2 Here is your handy guide to sport on television this week
3 Philip Reid: Hard to find the sense in closing golf clubs
4 Andy Farrell reshuffles his hand for rescheduled Italy game
5 Gordon D’Arcy: Ireland don’t need to do a Finn Russell on it
Real news has value SUBSCRIBE
Crossword Get access to over 6,000 interactive crosswords