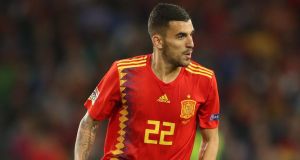 Arsenal have confirmed the arrival of the Real Madrid midfielder Dani Ceballos on a season-long loan and bought defender William Saliba from Saint-Étienne in Ligue 1 for a fee rising to €30 million before loaning him back to the French club.

The pair become the club’s second and third summer signings, after the 18-year-old striker Gabriel Martinelli. Saliba, another 18-year-old, will not join the squad for a year.

Ceballos captained Spain Under-21s to European championship victory in June and was named player of the tournament two years ago.

“We’re excited to see Dani join us,” the Arsenal manager, Unai Emery, said. “He is a talented player with big technical ability, creativity and precision.”

The player has been given the No 8 shirt by Arsenal, who hope he can fill the void left by Aaron Ramsey’s move to Juventus on a free transfer. He could make his debut against Lyon in the preseason Emirates Cup on Sunday.

“The coach was the turning point in terms of me joining this massive club,” Ceballos, who has six senior Spain caps, told the club’s website.

“He’s a Spanish coach and he knows me from my time at other clubs . . . I knew I had the confidence of the coach, which was very important. He’s a very tactical coach and I think that’s going to really help me to perfect my positioning.”

Arsenal’s Spanish right-back Héctor Bellerín also had an impact on the midfielder’s decision to join.

“I get on really well with Héctor away from football, on a personal level,” Ceballos said. “I told him I was thinking of joining and he told me not to think twice because this is a great city and a great club and that I was going to have a great time. I can’t wait to see him and say thanks for his help in getting me here.”

Saliba has moved to Arsenal despite an attempt by Tottenham to hijack the deal. Emery said: “Many teams wanted him but he decided he wanted to come to us and be part of our future.”

The player, asked why he chose Arsenal rather than Spurs, said: “The history, the badge . . . since I was little, I’ve been watching Arsenal play in the Champions League and so on, and there are a lot of French players who have come through here.”

Earlier Mesut Özil had responded to a Tottenham fan’s tweet which poked fun at the German’s performances. The supporter suggested Özil goes missing in games, by posting a picture of Spurs lining up before a match with a player seemingly absent and asking: “Was Özil in our team photo?”

Özil tweeted in response: “If you look closely you can see Spurs’ trophy cabinet.”