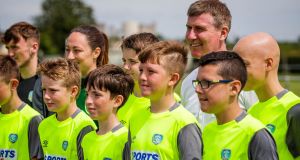 Stephen Kenny admits that it is a “challenging time” for Irish soccer but insists he has had to stay focused on his own education in the international game as others struggle to resolve the association’s ongoing governance issues.

“You can’t allow it,” says the Dubliner when asked if all the problems out at Abbotstown have been a distraction. “You have to retain focus. You couldn’t let your spirits diminish or erode.

“It’s obviously a challenging time for everyone in Irish football; there is no hiding from that. But I have to detach myself from it as a coach and just focus on the football.

“From that side of it it’s been quite positive with the young players coming through. We had five under-19s at the Toulon tournament and won the group against good teams that will be in next year’s Olympics. Tom Mohan and his team have done brilliant with the under-19s, for the semi-finals [of the European Championships]. So there is encouragement there and you have to harness that.”

Kenny was speaking in Duleek where the local club was hosting the latest instalment of the FAI’s annual “festival of football”, but there is a very different feel to this year’s countdown to the association’s agm as clubs, affiliates and individual candidates jostle for position in contested elections.

The League of Ireland constituency was shaping up yesterday to be a five-way race between UCD’s Dick Shakespeare, Dodie McGuinness of Derry City, Cork City’s Sean Ó Conaill, Peadar Ryan of Galway United and Sligo Rovers chairman Martin Heraghty. It is not clear, although the FAI remains hopeful, that all of the elections will be held as scheduled on Saturday with at least one of the constituencies still struggling to complete the nomination process.

While that all unfolds, the priority for Kenny has been to learn what he can from the tournaments in Toulon and Armenia ahead of the autumn when his under-21 side will play key games in their own European Championship campaign.

“It’s been a great learning curve for me and I haven’t been able to focus too much on what’s been happening although I have tried to get daily reports and so forth.

“For me, we’re fourth seeds and we have six qualifiers in September, October and November and great teams like Italy and Sweden coming to Dublin and great matches. So it has been about educating myself at the different tournaments I’ve been involved in and attending and it’s been a good learning experience for me.”

He did attend part of the National League Strategic Planning weekend and says he was impressed by both the All-Island League plan, an idea he has long been generally in favour of, put forward by Kieran Lucid and Niall Quinn’s proposals for new governance structures aimed at generating more revenue and improving infrastructure.

“After the Aviva, our second best stadium is probably Tallaght at the moment. There are probably 90 stadia in England better than that.”

1 Cam Newton broke the mould: Can his flame be rekindled at the Patriots?
2 The Game Changers: Vincent O’Brien, a pioneer who took Irish racing to the world
3 Pete Sampras: The forgotten great with the best serve in the business
4 The unsolved mystery of Goran Ivanisevic’s stunning Wimbledon win
5 Tipping Point: DeChambeau’s transformation raises questions, but who will ask them?
Real news has value SUBSCRIBE
Crossword Get access to over 6,000 interactive crosswords