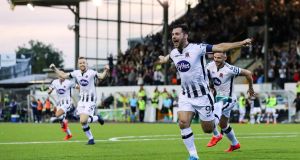 It was another of those nights when Dundalk’s disregard for the European game’s grand pecking order somehow seemed to be enough to see them through.

Qarabag dominated and might have won well, but by then end the hosts secured what might have been viewed as one of the game’s great draws , had it not been for a chaotic closing spell that will leave them wondering just how they did not win this game.

They have had, they often say, their best nights in Uefa competition when playing on foreign soil and the away goal they conceded here means they will require another very big performance and result in Baku next week.

Still, the way they hung in after conceding and salvaged a draw was remarkable. When it came, Pat Hoban’s close range header 12 minutes from time looked to have provided an unlikely lifeline. Given the chances they had very late on, though, Jamie McGrath, Dane Massey or Michael Duffy should have mustered at least one more goal between them.

It was a dramatic end to what had been a difficult night. Dundalk looked for long spells every bit like a side that is only tested like this a couple of times a year and having failed to survive the shock of the opening few minutes, it became very hard to see them ever settling to the extent that they would get the measure of opponents who ran them ragged in midfield at times.

The goal, just four minutes in, had been calamitous stuff with Seán Hoare, a hero last week in Riga, choosing to concede a corner under pressure from a long way out, because the risk of allowing Abdellah Zoubir to break free clearly struck him as a more dangerous prospect. There had looked to be less drastic ways to contain the situation but then the Dubliner could scarcely have imagined that his side would defend the set piece that followed in quite the way they did.

Mahir Emreli was all but unchallenged as he met Jaime Romero’s cross from the left and the extent to which his header wrong-footed Gary Rogers prompted suggestions there had been a deflection, although it was hard to spot one on the replays.

It could easily have been two when Simeon Slachev headed wide a little while later and the pressure was fairly relentless until the break, with Zoubir inflicting a fair amount of torment as he picked up the ball and ran at opponents who looked a little anxious to start with then, on at least one occasion, a little foolish.

The attacking nature of the Qarabag game plan was very much what Vinny Perth had said he expected before the game, but the pace at which they were executing it had clearly shaken his players. The idea had been that the visitors would leave space for Dundalk’s forwards to do their own thing but the locals, more used to generating panic among opponents themselves, repeatedly looked rattled.

There were times when they were very fortunate to get away with basic errors made under pressure, like when Chris Shields played the ball straight to Richard Almeida who fluffed the shot that followed.

Rogers redeemed himself four minutes before the break when he did really well to save at the feet of Slavchev and Perth’s side returned from the break clearly determined to make more of a fist of things.

There had been the occasional glimmer of hope on the attacking side of things with Seán Gannon and Duffy having each shown they had the pace to go past their opposite numbers. Brazilian goalkeeper Vagner was shaky enough under a bouncing ball to provide some encouragement too, but the final ball into the box had never been good enough through the first half to test him – the hosts fared little better when they sought a more direct approach to Hoban.

Briefly, that changed and McEleney then Seán Murray provided the supporters with something to shout about. When Duffy briefly threatened to get down the left hand side of the box, though, 37-year-old Rashad Sadygov, one of one of six full internationals in the visitors’ starting line up, temporarily dampened all the enthusiasm by displaying both the pace and presence of mind under pressure to stay with and then force the Derry man away from goal.

Dundalk, it seemed, needed to raise their game another notch but it proved a struggle and after Rogers had parried a Romero shot, Almeida passed up another clear cut chance to double his side’s lead.

The tempo slowed for a while but still the visitors seemed inclined to return home with a greater advantage, something they must have regretted as they lost their grip on things again late on. Dundalk threw themselves forward with increasing abandon, and capitalising on just the sort of scenario their manager had envisaged, McGrath won a corner after having briefly looked as though he would score.

Hoban took care of that seconds later, though, from Murray’s set-piece, and the excitement was only starting. Completing the comeback a long way from home next week still seems a very tall order but that, as they will tell you in these parts, is just the sort of thing they do.