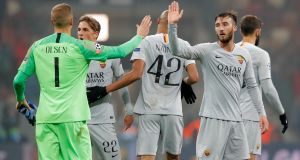 AS Roma put themselves on the brink of a place in the Champions League knockout stage when Lorenzo Pellegrini’s first goal in the competition gave them a 2-1 win at 10-man CSKA Moscow on Wednesday.

The game was settled in a four-minute spell in the second half when CSKA, having just made it 1-1, had Hordor Magnusson sent off and Pellegrini grabbed a fortuitous winner for the Serie A side.

Roma, who completed a double over the Russian side in Group G, have nine points from four games while CSKA have four. Real Madrid (six points) were away to Viktoria Plzen (1) later on Wednesday.

Roma, semi-finalists last season, went ahead through Kostas Manolas’ header in the fourth minute, and Alessandro Florenzi and Edin Dzeko wasted chances to put them further ahead before the break.

CSKA sounded a warning just before halftime when Georgi Shchennikov headed over with the goal at his mercy.

They levelled six minutes after the restart when Ilzat Akhmetov burst into the penalty area and found Arnor Sigurdsson, and the Icelandic teenager fired past Robin Olsen.

Bryan Cristante’s mishit shot landed at the feet of Pellegrini and the 22-year-old, who has already provided three assists in the group, beat Igor Akinfeev from a narrow angle as the CSKA defence claimed offside.