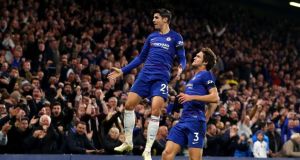 Chelsea are not dismissing opponents with quite the same panache as Manchester City, or even drawing as much focus in the title race as a resurgent Liverpool. Yet, almost on the quiet, Maurizio Sarri equalled a Premier League record here by extending his unbeaten start in the division to 11 matches, and it is the Italian’s team who are sandwiched between the more fancied contenders at present.

This was an impressive victory not least because Chelsea were challenged, and even pegged back, early in the second half but, rather than panicking, they responded. It helped they could fling on Eden Hazard from the bench, of course, with the Belgian’s introduction after a back injury instantly sending a ripple of apprehension through Crystal Palace’s ranks and his mere presence serving to raise Chelsea’s collective standards. None of his sparkle had been dimmed by a three-game absence.

That timely injection of class spurred the hosts to recovery. Their lead had already been re-established when, with 20 minutes remaining, Marcos Alonso burst down the left and crossed for Pedro, who was sprinting to the penalty spot, to finish emphatically on the charge. The Spaniard’s energy was a feature of this team’s display, the pace at which the goal had been constructed a reminder that Chelsea, too, can cut all comers apart. Palace, industrious but blunt, were sliced apart by the move and, in truth, never recovered.

All of which will have buoyed Sarri. Chelsea’s initial leads either side of the visitors’ equaliser had been established by a man enjoying something of a recent upturn in fortunes. Álvaro Morata had limped through to the end of last term as a player apparently far from comfortable at Chelsea, his early flurry of form having petered out into inadequacy. The doubts had remained under Sarri’s stewardship but there have been goals of late to paper over the deficiencies.

His fourth in six games was pilfered just after the half-hour mark, Cesar Azpilicueta finding Pedro whose cross was initially nodded out weakly by James Tomkins. The centre-half was still picking himself up as Pedro intelligently fired the ball across the six-yard box where Morata, squeezing space from Aaron Wan-Bissaka, collected and converted on the turn beyond Wayne Hennessey.

It was a goal made in Spain, and it roused the hosts from a becalmed opening, a period marked more by pinged Palace passes. Back then there had been promise in the visitors’ attacks, with Max Meyer, on only a second Premier League start, and Wilfried Zaha threatening to wriggle through. But, as befits a team devoid of a natural finisher, the approach play had tended to give way to nothing until, early in the second period, they plucked parity from nowhere. The source of their equaliser felt unlikely, rasped as it was beyond Kepa Arrizabalaga by Andros Townsend, a player who had failed to register in 20 top-flight games. There was composure in the buildup, from Tomkins’ pass slid forward to the eventual scorer, and Townsend’s neat exchange of passes with James McArthur in a congested midfield.

The hosts had been discomfited by the pace in Palace ranks, from Patrick van Aanholt to Wan-Bissaka via the frontline. Yet they still had their trump card to play. Hazard emerged from the bench midway through the second period, just after Hennessey had conjured a fine save to deny David Luiz, to unnerve opponents suddenly heaving to stifle a Chelsea revival. It was the Belgian’s free-kick which duly skipped unchecked through Palace’s attempts to block and reached Morata, alone at the far post. His finish was dispatched low into the far corner with Roy Hodgson cursing on the sidelines.

Then came Pedro’s third and a comfortable finale, with Palace’s pursuit of further reward rather desperate, Zaha running in to massed blue shirts and Azpilicueta blocking Townsend’s late attempt. As it transpired, Morata should have ended with the match ball after breaking upfield on to Hazard’s pass from a Palace corner, only for Hennessey to deny his attempt at a close-range lob. It mattered little. Chelsea, quietly but impressively, march on. – Guardian service