Former players among the options to replace Noel King 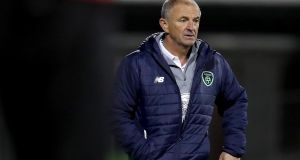 Republic of Ireland Under-21 manager Noel King has stepped down. Photograph: Tommy Dickson/Inpho

The FAI has yet to outline a timeframe for replacing Noel King, who has stepped down after eight years in charge of the Irish under-21 team but it is expected that they will try to make an appointment before the draw for the 2021 qualifying stages which takes place on the 11th of December.

King’s departure, after four full qualifying campaigns in charge, was widely expected and so a fair amount of thought is likely to have been given at Abbotstown as to who might take over. But it remains unclear whether the association will seek outside applications or look to make an appointment from within.

There have been rumours for some time that former senior international captain Robbie Keane was to be given some sort of role although the 38 year-old has yet to start on his Pro License course it seems unlikely that he would be put in charge of a side whose failure to ever qualify for a European Championship is an ongoing frustration. Mark Kinsella has been working with King but seems unlikely to be in the reckoning while Kevin Doyle, Andy Reid, Richard Dunne, Sean St Ledger and Colin Healy have all been working with younger national teams recently.

Making it to the finals presented a particular challenge when the tournament consisted of just eight teams, as it did until the 2015 tournament, but it is currently 12 and John Delaney suggested last week that it is likely to be expanded again, to 16, ahead of the 2023 edition.

The likes of Tom Mohan and Colin O’Brien, experienced coaches of underage international sides who are already working for the association are obvious options for the job while there would be the possibility of approaching somebody like Lee Carsley who has established a strong reputation in coaching young players both at club level in England, where he enjoyed some at Manchester City, and international level having also worked with Aidy Boothroyd with the English Under-19s and 21s.

Another possibility would be to appoint somebody from the Airtricty League with Stephen Kenny the obvious candidate. There is no guarantee that the Dubliner would be interested at a time when he has just won another league double and has spoken about his hopes of repeating Dundalk’s group stage success in Europe but he has previously spoken about his long-term ambition being to manage the Irish senior team and he may see a successful stint in the Under-21 role as a potential stepping stone.

Kenny, though, is under contract until the end of the 2020 season at Dundalk and given how central he has been to the club’s success in recent years it seems unlikely that the club would just allow him to leave. The association might well be deterred by any demand for compensation or by the need to even match a salary that would exceed what their existing underage managers would be on.

The new man is likely, in any case, to be the first to manage the team at a finals even if they do not qualify in his first campaign with Ireland expected to succeed in its bid to host the tournament in 2023.

1 Keith Duggan: Through the glories and the disgraces, we were all Maradona addicts
2 Rugby Stats: Blame game at lineout time is on the whole team
3 All bets are on as America opens the gambling sluice gates and the dollars flow
4 Diego Maradona dies of heart attack, aged 60
5 Darragh Ó Sé: Cork and Donegal went out with the wrong attitude
Real news has value SUBSCRIBE
Crossword Get access to over 6,000 interactive crosswords