How good would United be if they had Pep Guardiola at the helm?

Would City be top of the table and averaging three goals a game under José Mourinho? 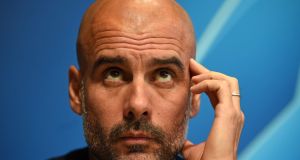 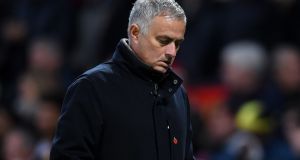 If it is the Manchester derby on Sunday then it must be time to wheel out the arguments about which is the better squad, who would get into a composite team of the city and so on, except as there are several excellent players at the Etihad finding it hard to get into the Manchester City first XI that particular exercise may turn out a little one-sided.

In its place comes a debate about the differing qualities and approaches of the two old rivals managing the Manchester squads. Would United still be grinding along so unevenly if they had Pep Guardiola at the helm and would City be out in front at the top of the Premier League and averaging three goals a game under the tutelage of José Mourinho?

Stan Collymore can probably be blamed for all this. Consistent in his distrust of Guardiola at City, he suggested the other day that Mourinho at the Etihad would probably have delivered a Champions League trophy by now. While this is highly improbable, given City have yet to reach a final and Mourinho was unable to win the Champions League during his three seasons at Real Madrid, one can almost follow the logic. A team coached by Mourinho would not have gone out to Monaco two seasons ago as a result of conceding six goals home and away, and rather than being so open in the first leg at Anfield last season Mourinho’s plan would almost certainly have been to bore everyone to death for a 0-0 draw.

But what about the other part of the argument? Could Guardiola turn the present United side into champions, or would he too struggle with a disparate set of players and seemingly random transfer policy bequeathed by the club’s last three managers and an executive vice-chairman who at times appears to have had enough of reaching for the chequebook to break another record? The safest answer might be that given time Guardiola could probably lead United to the sunlit uplands but instant success may be a tall order considering he failed to win anything in his first season at City.

Guardiola doubters will most likely jump in at this point to remind everyone that taking over underperforming clubs has not exactly been a feature of his managerial career. This is an elite manager who has only been associated with elite clubs. In terms of an established level of success City are his biggest risk so far but they were champions two years before he arrived and they have a level of financial backing – the admissibility of which is under investigation – that sets them apart from everyone else in England and just about anyone else in Europe.

United are also an elite club and to suggest they have struggled since Alex Ferguson stepped down would be to invite complaint from the vast majority of Football League clubs who know what struggle is but these things are relative. United had to compete in the Europa League in Mourinho’s first season and Guardiola has never had to dirty his hands with anything so unhip.

What one imagines Guardiola would find most perplexing at Old Trafford is the lack of continuity, perhaps inevitable after three different managers in a short space of time. He values stability above all else and that is what Barcelona, Bayern Munich and City have been able to offer.

He said a week ago that one of the first areas he felt he needed to strengthen was central defence, so he went out and bought Aymeric Laporte and John Stones, the first having come to his attention while playing in Spain, the second having impressed with his performances for Everton. Both players are aged 24, and the idea is that their partnership at the heart of City defence will last, certainly for time Guardiola remains at the club.

This is hardly foresight of the fiendishly clever variety, simply sensible investment and good housekeeping but it is the sort of thing City appear able to do easily while United are finding it difficult.

Mourinho has been chopping and changing his centre-backs all season, buying new ones then asking for more, unsettling various members of his defence with cheap digs and public indications of a lack of confidence, which is one reason why United have lost three of their 11 games while City remain unbeaten.

United are playing quite well, much of the storm that surrounded Mourinho and his players a month ago has subsided, but those early defeats along with the consistent form of City, Chelsea and Liverpool mean they have been discounted from the title race already.

There is still time for that perception to change should United achieve an attention-grabbing result on Sunday, though until and unless that happens the overall feeling is City are working towards a plan, of which Guardiola is a key part, while United are living hand to mouth, with Mourinho an occasional irritant rather than agent of progress.

Perhaps the essential point to note is the idea that Guardiola might lift United out of the doldrums could only happen in a hypothetical pub discussion. In reality, City knew the manager they wanted, knew the club whose success they wished to try to emulate, and were prepared to wait years and invest considerable amounts in backroom staff until all the required pieces fell into place.

United did not really know who or what was required once Ferguson departed, the process since has been one of trial and error, and even now club and supporters are divided over Mourinho’s appointment and managerial style. There is possibly not as much difference between the two managers as might be imagined.

Both have proven themselves capable leaders, shrewd and regular winners. Each would probably enjoy a degree of success in the other’s job. It is the clubs themselves that are growing apart. City have been forging ahead for the past few years, United standing still at best. For decades the United job was regarded as the biggest in England. At present, demonstrably, it is no longer the biggest in Manchester.