Juan Bernat has shown prowess with defending and scoring

Champions League: PSG left-back has rejected club’s offers so far proving he knows his worth 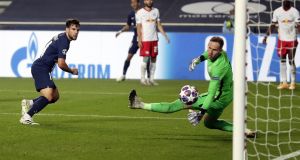 If you want to see the world’s best left-back in action – or if you are Barcelona’s Nélson Semedo and would just like to put a face to the dancing hellion who whirred past you in Portugal last week – then you will be tuning in to Sunday’s Champions League final to watch Bayern Munich’s Alphonso Davies, a phenomenon at 19. But make sure you also keep an eye on his Paris Saint-Germain counterpart, Juan Bernat.

Bayern know all about Bernat and it is fair to say that at least some people associated with the German giants never expected to see him standing between them and European glory. At least not in the sense that he could end up lifting the trophy instead of them.

Manchester City fans know that Pep Guardiola has trouble finding reliable left-backs and some people at Bayern might tell you the Catalan got it wrong when he brought Bernat to Bayern from Valencia in 2014 even though the player contributed to four Bundesliga titles in a row. But many folks appreciated what Bernat did and were surprised when Bayern sold him two years ago, especially for a fee of less than £5 million (€5.5 million).

But at one memorable press conference Bayern’s then-president, Uli Hoeness, exploded at suggestions that the transfer was a mistake, suggesting the club would never win the Champions League with Bernat.

“You have glorified Juan Bernat,” Hoeness raged at journalists questioning the wisdom of letting the player leave before explaining that the decision was made after a flimsy challenge by the left-back led to Sevilla taking the lead against Bayern in a last 16 tie in April 2018. That was Bernat’s only appearance for Bayern in the competition that season and he was dragged off at half-time. Bayern came back to win but Bernat never played for them in the tournament again and was sold that summer.

“When we played in Sevilla he alone was responsible for the fact that we almost got knocked out,” continued Hoeness. “On that day we decided to get rid of him because he almost cost us the whole Champions League. I wish I could have heard your commentary after that about how he played like shit.”

Hoeness apologised a while later and Bernat never fired back, even after leaving the club, gently saying that he would always remain grateful for everything Bayern taught him. Nor was there much noise when he arrived at PSG at the same time as Eric Choupo-Moting, a pair of deadline day signings that registered close to zero on the glam-o-meter. Bernat-mania is not a thing.

But the left-back has forged a place for himself in a side built around superstars, proving far more dependable than the sometimes-spectacular, often-goofy Layvin Kurzawa, who cost more than four times as much and will most likely watch from the bench on Sunday. Bernat is a quietly diligent defender, clever, fast and two-footed. And, in a surprising twist, since joining PSG he has got into the habit of scoring important goals in the Champions League.

Five of the six goals he has struck for PSG have come in the tournament where they crave victory most. He showed his speed and smarts by joining in an attack and firing into the net with his right foot against Napoli in October 2018, and then did likewise the following month against Liverpool, cutting in from the left and pouncing on a half-clearance by Virgil van Dijk before dodging between Joe Gomez and James Milner and ramming a low shot past Alisson, again with his right foot.

He tapped in with his left from a cross by Kylian Mbappé against Manchester United in the last 16 the following season before Ole Gunnar Solskjær’s side made a freakish comeback. Then he struck at the same stage this season, sticking out his left foot to stab expertly into the net against Borussia Dortmund. In Tuesday’s semi-final he rounded off the scoring against RB Leipzig, darting in off the left flank again, this time to score with his head.

Bernat’s contract at PSG expires next summer. He wants to stay and PSG want to keep him. But this year he turned down their first two offers of a new deal. He knows his worth. On Sunday he hopes to remind Bayern of it, too.

“I know I can still improve on the defensive side of things,” he said in June. “I work to do that every day. But my characteristics suit PSG’s style. I did not take a step down when I left Bayern. PSG have grown a lot.” – Guardian