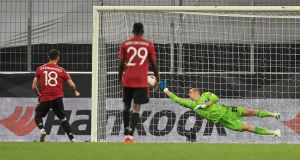 Manchester United struggled to put away a doughty FC Copenhagen before doing so in extra time, Bruno ­Fernandes again the hero for Ole Gunnar Solskjær.

The manager introduced Juan Mata for Mason Greenwood before the half-hour and this proved prescient. On 95 minutes Anthony Martial was slipped in by the Spaniard and while the superb Karl-Johan Johnsson saved, a moment later Andreas Bjelland pulled the United striker down.

Clement Turpin awarded United’s 22nd penalty of the season and ­Fernandes beat Johnsson to set up a semi-final with Wolves or Sevilla who play on Tuesday.

Solskjær selected Eric Bailly to partner Harry Maguire with recently injured Victor Lindelöf on the bench, while preferring Fred instead of Nemanja Matic in midfield.

Copenhagen were hoping to ­emulate their surprise 1-0 2006 ­Champions League group game victory over United, when Ståle ­Solbakken was their manager in his first and Solskjær played.

In sweltering 30C-plus heat, United claimed a first corner though Bruno Fernandes’s delivery was defended easily. When he later got in behind Copenhagen and headed back towards goal he needed Martial to show anticipation. Instead, again, the attack foundered.

More pleasing was the rhythm Fernandes and Paul Pogba were ­establishing in midfield, pulling their white-shirted opponents around: ­precisely what was required in the conditions. A move that went ­Martial-Marcus Rashford-Martial-Greenwood had Copenhagen turned, then relieved, when ­Johnsson could collect.

Play soon moved to the other end as Copenhagen embarked upon a ­sustained period of pressure. Brandon Williams was beaten by Pep Biel who crossed from the right and United were thankful Bailly made the block.

Williams then redeemed himself with a flying header from beneath his bar after Martial inadvertently flicked on a Rasmus Falk corner.

Next, a hapless Fred passed straight to Jonas Wind and Copenhagen were in, the ball going to Mohamed Daramy. Bailly looked to have shepherded him away from goal before the forward swivelled and left the defender on the turf. Maguire stopped the shot, the ball rebounded to Wind before Pogba, finally, cleared.

This had Solskjær screaming at Fred and United requiring a serious upturn in tempo. Confusion reigned when Turpin awarded a penalty to them for what appeared a foul on Martial before VAR ruled offside.

Better from United followed the drinks break. Fernandes fired a free-kick just over, Fred floated a 40-yard ball on to Greenwood’s chest and a sequence involving Aaron Wan-­Bissaka, Pogba and Rashford came close to ­having Martial clear in. United continued to buzz around.

Bailly was proving United’s most important defender. When Guillermo Varela wheeled past Williams the cross would have reached Daramy if not for another vital intervention from Bailly.

As the break neared Greenwood fired home but VAR ruled – correctly – that he was offside. This, though, did reflect how United had found a higher gear.

This surely had to continue in the second half if a semi-final berth was to be secured. Copenhagen had a different idea. This was signalled by a high press that disrupted United and led to a free-kick for the Danes.

Still, the red shirts were soon ­flooding forward as slick Rashford footwork plus a Fernandes pass set up Pogba: his curled effort went wild. Greenwood apart, this summed up United’s lack of composure in front of goal.

When Martial, Fernandes, and Williams combined the final effort was scuffed by Fred: more franticness when coolness was needed. Yet more frustration occurred when Greenwood’s left-foot strike hit the right post and Rashford turned home: like the former earlier, the latter was offside.

Copenhagen appeared to be feeling the conditions more. The way Fernandes was allowed a touch before crashing a 25-yard diagonal off a post – the left this time – spoke of a wilting rearguard.

United had a scare when Guillermo Varela went down in the area but no penalty ensued. Then, Martial’s late effort was superbly saved by Johnsson.

By the final whistle the deadlock remained and it then became a test of hunger and attrition. – Guardiam