Thousands of fans have suddenly hitched their identity to a can of energy drink? 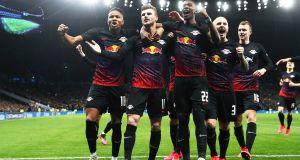 It was the fans that were the most puzzling part. Thousands of them, packed into the north-east corner of the ground, all immaculately bedecked in Leipzig white and red, all loud and fierce and partisan, all of them singing about a club that barely even existed a decade ago. What had so hastily stoked their passion? At what point in their effortless rise through the divisions had these previously unattached men and women decided to commit to this strange new project, essentially hitching their identity to a can of energy drink?

But then this is the paradox of RB Leipzig, a puzzle encrypted in plain sight, a team that manage to be both direct and elusive all at once. Even their name carries an implicit nudge and a wink: it’s RasenBall Leipzig, but you know what it really stands for. And on a cold night in north London this essential contradiction – between the authentic and the inauthentic, the organic and the confected, the spontaneous and the rehearsed – lay at the heart of their performance.

The attacking moves were drilled and rigid and yet utterly unreadable, not least to a flailing Tottenham defence. The strategy of aggression and relentless verticality was constant, but the tactics employed in their service shifted subtly all night: measured possession play in the first half, a more proactive approach at the start of the second, and then a deeper block late on.

All this for a team boasting few household names and no player acquired for more than £20m, yet built on immense corporate wealth and bolstered by one of the most sophisticated backroom operations in the sport.

In many ways, Julian Nagelsmann is the perfect face for this young, confident club. Still only 32, Nagelsmann is in that extremely pleasant sweet spot where his coaching reputation has been made but his flaws have not yet been discovered. He’s smart and he knows it, and most crucially of all he knows you know it, too.

You can see it in the little knowing glances he gives to the camera during interviews, the thespian arm gestures on the touchline, the ostentatious tics of a man aware that all this is a stage, and everyone on it essentially a performer.

There was, of course, another manager who used to be a little like this. On Tuesday it had been put to José Mourinho in his pre-match press conference that Nagelsmann represented the new generation of coaches, much as he once did. “What’s that?” he retorted with calculated ire. “New generation? The opponent is Leipzig. I don’t have an opposing coach. I play against his team, Leipzig.”

And yet for all the obvious dichotomies between the pair – age, reputation, tactical outlook – perhaps there are more similarities between Nagelsmann and Mourinho than either would care to admit. Neither is a coach who fetishises possession. Here, Leipzig had the lion’s share of the ball, but this was as much a function of Tottenham’s own low block as their own volition. Both are instinctively suspicious of dogma and pseudo-intellectualism, and would probably agree that coaching is ultimately an expression of personality.

“If you are a top leader and don’t understand football,” Nagelsmann said in an interview last year, “you will still get pretty good results. Conversely, if you are a complete idiot human but the absolute tactics specialist, you will definitely not get a title.”

Perhaps Nagelsmann’s most counterintuitive quality, however, is the idea that collective triumph is an accumulation of individual ambitions. Unlike Jürgen Klopp, for example – a coach with whom he is often lazily compared – Nagelsmann believes that players are innately individualistic, and that great teams function best when each player is motivated by a personal goal. This, perhaps, is evident in Leipzig’s approach. They relish the man-on-man grapple, the tight squeeze, the straight foot race, because whenever an individual battle presents itself they back themselves to react quickest.

And 10 minutes into the second half, so it proved. As the excellent Timo Werner dinked the ball into the area, Ben Davies reacted just a fraction of a second too slowly, and Konrad Laimer was able to steer the ball away with his chest, gratefully accept contact and tumble to the turf. Werner himself slotted away the penalty that gives Leipzig a slender but definite advantage.

It could have been more, of course, and the precedent of Ajax’s collapse in last year’s semi-final will give Leipzig ample pause. But as they ran Tottenham ragged here with thrumming forward momentum, as Tottenham tried vainly to thwart them with disjointed rhythm and inconsequential long balls upfield, it was hard not to feel that it was not simply one goal separating these teams but something more fundamental than that: a gulf of ambition, of approach, perhaps even of time.

1 ‘Magnificent’ Conor Connelly remembered after sudden death
2 Karen Robinson Walton: I am looking at him. I say ‘Benjamin, what have we done?’
3 Billy Joe Saunders apologises for video of 'advice' on how to hit women
4 Aleksander Ceferin concedes season may never be finished
5 TV View: Mícheál Ó Muircheartaigh helping us all keep the faith
Real news has value SUBSCRIBE