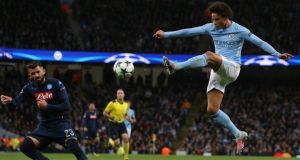 Manchester City extended their perfect record in Group F with a display that saw them purring up though the attacking gears before finding themselves reeled in by high-class, fast-breaking opponents. Goals from Raheem Sterling and Gabriel Jesus inside the first quarter of an hour had suggested another free-scoring Sky Blue romp. But by the end Napoli could feel hard done by in a game where the score really could have been anything and a missed first-half penalty by Dries Mertens proved crucial.

On a mild, still night in Manchester the ground was boisterously full, with a ripple of expectation around those steeply tiered stands at the sight of Pep Guardiola’s evolving scoring machine. City faced another bunch of dashers. Top of Serie A with eight wins out of eight, Napoli have set off like a train, revelling off their own slick, pacy “Sarri-ball”, a direct, hard-running style that promised plenty of space in behind.

Napoli made two changes in midfield, Amadou Diawara and Piotr Zielinski coming into midfield. For City, Sergio Agüero was once again on the bench, with another outing for that thrillingly youthful front three.

The early minutes were a little scrappy. Fabian Delph continued his funky left-back variations, tucking into midfield, and it was down that side that City’s opening goal came, almost out of nowhere, on nine minutes.

Fernandinho played a hard, flat cross-field ball out to Leroy Sané. He fed David Silva’s cute run. The cutback was dummied by Jesus and shanked by Kyle Walker, but Raheem Sterling was there to smash the loose ball into the net. It was Sterling’s sixth goal in the past eight games.

With 13 minutes gone it was 2-0: another swarming break, another goal for Jesus, another assist for Kevin De Bruyne. They were helped by some dreadful defending by Raúl Albiol, who headed the ball straight into City’s on-rushing press, then fell over trying to match Jesus’s spin and dart behind him as he finished De Bruyne’s cross.

Rack ‘em up. That makes five goals in seven days for Gabriel Jesus, three assists in 80 minutes on the pitch for De Bruyne. Watching City feels a bit like stumbling across some wild inter-village tomato throwing contest, an autumn glut, all juice and pith and glorious, drooling excess.

With 24 minutes gone they breezed forward again, Sterling feeding Sané, who laid the ball back for De Bruyne to smack a shot on to the underside of the crossbar and out.

On the touchline, Maurizio Sarri, the Napoli manager, capered about waving his arms, tracksuit jacket sleeves yanked up in exasperation. His team had become utterly porous. When they pressed David Silva and De Bruyne skipped around them. When they held their suicidally high line the forward sprites simply skipped through them. Jesus swivelled and had a shot cleared off the line.

There were glimpses of brittleness, too, and as the half wore on even a sense of City enjoying playing this wonderfully lissome football a bit too much.

At one point Delph and Otamendi seemed to have swapped positions. Why exactly was not immediately clear. And for a while Napoli picked some holes in City’s gallivanting defence, picking out the familiar swift through-passes down the side of the centre-backs for José Callejón and Lorenzo Insigne. They should have scored before the half was out, most notably from the penalty spot on 37 minutes after Walker had pulled Albiol down. Mertens plonked the kick straight at Ederson who saved with his legs.

It is another kind of test for City to maintain their intensity levels in games like these against opponents who will have their own periods of possession. Napoli began the second half like a team that had been slapped around the chops and cleared its head, Marek Hamsik seeing more of the ball and both full-backs pushing high up the pitch.

De Bruyne continued to drive City on, carrying around with him that personalised pocket of space he unfurls wherever he goes. There is no better playmaker in the Premier League, perhaps anywhere, a player who can do it all, dropping deep, managing the counterattack and producing surgical scoring passes.

It is at the back that City looked vulnerable. Time and again they played the ball around with a pointless sense of daring. With 65 minutes gone an extended passage of keep-ball ended with Napoli stealing possession and John Stones blocking Hamsik’s shot at full stretch.

Teams in this competition will take a toll at some stage, as Napoli did six minutes later, the excellent Diawara pulling one back from the spot after Fernandinho had tripped Faouzi Ghoulam. Both teams might have scored again but City held on and with nine points from three games will expect to cruise the rest of this group.