Rodgers wary of the Heynckes effect ahead of Bayern clash 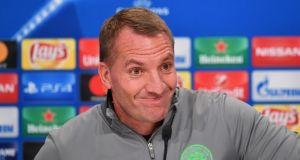 Celtic manager Brendan Rodgers is wary of the Bayern bounce ahead of their Champions League encounter at the Allianz Arena on Wednesday night.

In his first game back Bayern beat Freiburg 5-0 in the Bundesliga and that did not go unnoticed by Rodgers, whose side are on three points with the Munich side after two games.

The former Swansea and Liverpool manager, who confirmed centre-back Jozo Simunovic would be out with a hamstring injury while skipper Scott Brown and fellow midfielder Stuart Armstrong are available again, said: “They have obviously changed management and that has given them a little bit of a bounce effect.

“Just seeing the change from how they had been playing, on Saturday.

“You always look at players and how hard they work and how they press and certainly in Saturday’s game Bayern Munich’s counter press went to a different level to what they had been.

“So that is something that we will have to cope with.

“There were a couple of results that didn’t go the way they wanted to. They were 2-0 up in two games, home and away, and got pegged back.

“Obviously the new manager came in for his first game at the weekend. He is someone who is respected throughout the club and a lot of players here know him very well, they know how he works.

“Sometimes you get that effect. How long it lasts, time will tell. But for us, however that effect is, we respect that we are playing against some fantastic players.

“No matter how your league form is, this is a competition that you want to do well in. So I think they will be motivated, they will want to press the game and show their qualities.

“We need to be resilient but we know that we can come away from home, play football and score goals and that is our intention.”

Rodgers will have to reshuffle his back-line once again and although he bemoaned the loss of Simunovic, he welcomed the return of Brown and Armstrong.

The Northern Irishman said: “Jozo came back into the team after being injured and performed exceptionally well and you always want your top players available.

“But he had a slight reaction to the injury he had before and unfortunately he is not available. Obviously we are waiting on the MRI results so we are hoping it is not going to be [long term].

“He felt a twinge in training the other day so we just need to wait and see.

“It is a huge boost for us [to have Brown and Armstrong available]. Both players have different qualities. Scott has real leadership qualities and ever since my time here, he has performed.

“He is a big-game player so he will impose his way of playing and that is always a big inspiration for the team.

“Stuart is a player who has grown at this level, he has good mobility and a goal threat.

“So it is good to have both those players available and it makes our squad a bit stronger.”

1 Limerick roar from behind to sink Tipp and start league in style
2 Mike Catt hopes to have Irish backs purring in Six Nations
3 Six Nations: Ireland are contenders but England still the team to beat
4 Liam Cahill uses playing regrets to drive him as Waterford boss
5 GAA officials and referees brace themselves as new rules kick in, and this time it's for real
Real news has value SUBSCRIBE