Real hope for Spurs as point made in Madrid 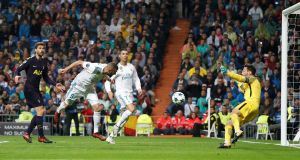 Harry Kane’s reaction said it all. It was a mixture of disbelief and deep regret. There were 71 minutes on the clock at this glittering venue and, suddenly, Tottenham’s main man was in. The pass from Fernando Llorente was made to measure and, when Kane shot, all eyes followed the ball to the bottom corner of the Real Madrid net.

It squirmed agonisingly wide, Keylor Navas having got his fingertips to it and everybody seemed to take a moment to let it all sink in. Kane, who had been the story before the match because of his form and Real’s interest in him, might have made the grandest of statements.

Yet, despite Kane’s miss, Tottenham made a point of their own. Mauricio Pochettino knew this match would be a gauge of his club’s progress. “When you come here, you feel the reality about football,” he said on Monday.

The reality was pretty sweet. Real showed their quality and there were periods when Tottenham needed to dig in. They could be grateful to Hugo Lloris on at least two occasions - he saved superbly from Karim Benzema and Cristiano Ronaldo in the second half. But it said everything about the maturity of their performance that they closed out the draw with a measure of comfort. Pochettino and his players have felt their hopes surge.

The 4,000 travelling Tottenham supporters had bellowed out Kane’s song at the kick-off - reminding the Bernabéu where he had come from - and, following the halfway point of the first half, he helped to provide them with a pinch-me moment. Gloriously from a Tottenham point of view, they had grown into the tie and the breakthrough goal came at the end of their patch of deep purple.

Raphaël Varane will carry the can and it was the most unfortunate of deflections that sent Serge Aurier’s low cross looping past Navas but Kane had forced the error. It was an incisive move, Moussa Sissoko finding Harry Winks and the young midfielder releasing Aurier with slide-rule precision. From the cross, Kane tried and failed to execute a flick but Varane, in close attendance, blundered horribly.

Nobody could say the goal had not been advertised and this was a period that Tottenham could savour. Kane had worked Navas with a powerful downwards header in the 19th minute from a Christian Eriksen corner and then there was the penalty controversy.

Kane fired a move up the inside-right channel, turning away from two white shirts and switching on the power before crossing low for Fernando Llorente, who had been preferred to Heung-min Son in Mauricio Pochettino’s 3-5-2. Navas got down but Llorente got a second bite and that was when Casemiro chased in and took away his standing leg. Even Spanish radio said it was a penalty. The referee, Szymon Marciniak, was unmoved.

He would point to the spot in the 42nd minute - at the other end - and it was one of those decisions that polarised opinion. Aurier, who looked to have been fouled by Toni Kroos in the buildup, felt a surge of panic when the Real midfielder ran away from him on to Karim Benzema’s pass.

Aurier went to ground and, at that point, it was possible to fear even more for him. The contact was a long way from being excessive but it was enough for Kroos to feel it and go down. Cristiano Ronaldo sent Hugo Lloris the wrong way with his kick.

It was richly entertaining. Luka Modric was brilliant, as usual, and, with him pulling the strings, Real had started brightly. Ronaldo hit the post with a header and Benzema fluffed the rebound, with the far corner gaping, while Ronaldo fizzed inches wide of the far post. Isco would also work Lloris while, at the other end, Tottenham could point to a low blast from Aurier that extended Navas.

Pochettino cannot be second guessed in terms of team selection. Nobody had expected him to play Llorente, whose only previous start for Tottenham had come against Barnsley in the Carabao Cup. The former Spain striker brought his big-match temperament while he provided an outset and linked up the play. Winks belied his inexperience with a remarkably composed perform while Aurier showed his buccaneering spirit, even if he caused a few flutters.

Real turned the screw at the start of the second half and only Benzema knows how he did not convert Casemiro’s cross from point-blank range. All alone, he planted his header down but Lloris, who was going the other way, stuck out a leg to save. It was a marvellous piece of improvisation but it had to go down as a gilt-edged miss.

Ronaldo shimmered with menace and there was the moment when he outstripped three Tottenham players in the 65th minute before working Lloris. Earlier, the Tottenham goalkeeper had saved quite brilliantly from him while Lloris had to scamper across his line to deny Isco. Back came Tottenham and, after Kane’s miss, Llorente ushered in Eriksen but, again, Navas saved well. Tottenham’s point was hard-earned. It was celebrated wildly.