How the league was won: Cork City’s fast start allowed for a stumble 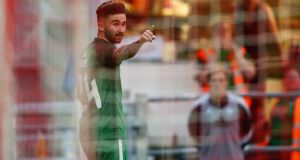 Cork may have stumbled a little as they sought to get over the line in recent weeks but they have ultimately succeeded in beating a team regarded as one of the best the league has ever produced into second place and clinched the title with two games left to play. Really, there can be little arguing with that.

It may be for their form over the early part of the season, when they were breaking records and blowing opponents away, that this third title success will be most fondly remembered by their fans but over the campaign as a whole, the table still shows, they have been better than their rivals.

Dundalk, it is worth remembering, started out as firm favourites to equal Shamrock Rovers’ celebrated four-in-a-row and the majority of neutrals felt that despite their continued improvement, John Caulfield and his players would be consigned to another season in their shadow.

It didn’t take long before the sceptics had to start reassessing things.

The very first week of the campaign, Cork won a potentially tricky game against Finn Harps in Ballybofey and by the time they headed to Tallaght on St Patrick’s Day to face their first real test against would-be rivals, they had won four from four with Seán Maguire showing early signs of the way he would set the division alight by scoring in every game. City didn’t play especially well that night but the striker got two goals – one an opportunistic effort after a goalkeeping error, the second a penalty he had won himself – to decide the game.

And so, even before the end of March there was a growing sense that we might be witnessing something special starting to unfold.

The winning streak lasted until mid-May when Galway held the league leaders to a 1-1 draw but by then the title already seemed Cork’s to blow and when they rebounded from the ‘setback’ by beating Drogheda 5-0 the following week it was increasingly apparent that they wouldn’t be doing that. It would be the end of July before they were actually beaten with Bohemians winning at Turner’s Cross.

By then, Maguire was gone and his departure seemed to take its toll as the rate at which they scored goals declined and so they started to stutter a little.

Having come close to clinching things with a win over Dundalk a couple of weeks ago, though, Caulfield can finally savour his success now, safe in the knowledge that a steady programme of team building over several seasons has finally paid off.

Maguire and his goals will inevitably be mentioned most when the campaign is recalled but goalkeeper Mark McNulty was again outstanding and City were better than anyone else for the best part of the season in just about every other department.

There were a few who asked aloud if Conor McCormack could really be expected to improve a side that had finished second in those campaigns but he did with the 27-year-old Louthman anchoring the midfield brilliantly behind the likes of Garry Buckley, Gearoid Morrissey and Sheppard, all of whom stood out at times and, ultimately, chipped in with significant goals.

Where achieving that would leave them in the list of great title winning teams is open to debate – Dundalk’s standing in that particular table was never conclusively resolved despite their more sustained success – but it clearly reflects their superiority over the course of a year that won’t be forgotten anytime soon around Turner’s Cross.