Direct Denmark in a good place ahead of Irish playoff 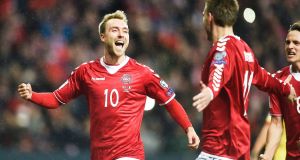 Denmark finished their World Cup qualifying group strongly and will go into next month’s playoff against Ireland in high spirits.

The Danes missed out on the 2014 World Cup but finished second in Group E behind winners Poland as they now look to book their fifth appearance at the finals.They finished five points behind Poland, although they beat the latter 4-0 in their home tie.

They also beat Montenegro away, after losing to both them and Poland in the earlier rounds last year. During the summer their improved form continued with a 1-1 draw with reigning World champions Germany in a friendly.

“There is a good feeling in Denmark about these playoffs and some excitement perhaps already about the possibility of being back at a World Cup after some difficult campaigns,” explains Danish journalist Stefan Christensen of Ekstra Bladet.

“Of course, being seeded is an important part of that and nobody doubts how important it was to avoid teams like Italy and Croatia.

“It has been an interesting period for the Danish team. After the years of possession football under Morten Olsen, the current coach, Åge Hareide, changed to a more direct, physical style for the last four games and it worked. Nobody really expected that we could beat Poland 4-0 at home after losing there but the team finished the campaign strongly and while it is not as good as some of the Danish sides from the past, now people believe in it again,”said Christensen, talking ahead of Tuesday’s draw. Ireland will be away to Denmark on November 9th-11th, and vice versa for the second leg on November 12th-14th.

“Hareide has used three strikers in these recent games with two big men, Andreas Cornelius of Atalanta and Feyenoord’s Nicolai Jorgensen becoming key players for the coach along with the much smaller Pione Sisto. Others have played their part with Thomas Delaney getting three goals in Armenia but Christian Eriksen is by far the most important of all with the Tottenham midfielder picking up many of the loose balls from the play in front of him and scoring a lot of important goals.

“Eriksen has had some some difficult times with the national team during his career but over these 10 games he has been back to his best and the team will need him to perform well in the playoffs. Without him the outlook for the team would be very different.

“If he and the team plays well then I think the expectation would be that Denmark can go to the World Cup, although there would be a feeling that Ireland would be a tough opponent and that it would be better to play Northern Ireland or Greece.”

Roger Federer survives seven match points to reach semi-finals 08:21
Andy Farrell set to name first Ireland team; FAI staff upbeat after first meeting with Quinn and Owens 07:27
‘It doesn’t bother me’ – Thomas Barr on the what ifs of Rio 07:00
Hopes of a home winner alive as Barty reaches last four 07:38
Waterford’s Bennett aware of past but looking to a better future 06:30

1 Gerry Thornley: Temple Carrig are the true schools rugby story of the season
2 Ireland v Scotland: Doris’ day as Caelan set for first cap
3 In mourning Kobe Bryant mourn the bad as well as the good
4 Owen Doyle: Breakdown of law and order in rugby must stop
5 Men in Black: The referees for Ireland’s Six Nations games
Real news has value SUBSCRIBE
Crossword Get access to over 6,000 interactive crosswords