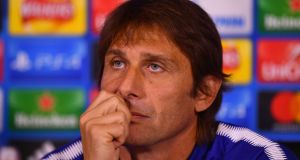 Chelsea manager Antonio Conte: “We have players in our team who are not used to playing three games in a week.” Photograph: Dan Mullan/Getty Images

Antonio Conte has conceded Chelsea’s “thin” senior squad will force him to take risks in his team selection in the weeks ahead with a perceived lack of options, over which he had expressed concern to the hierarchy over the summer, leaving them vulnerable to suffering further injuries to key players.

Chelsea will have Alvaro Morata available again after a thigh complaint for Wednesday’s Champions League group game against Roma, the Spain international having been cleared to return to first-team duties after three days’ full training with the group.

However, Victor Moses and N’Golo Kante will be absent until next month with hamstring problems, injuries Conte puts down to an increased workload with his team competing in four competitions this term.

The head coach had hoped the board would add far greater strength in depth over the summer but, despite an outlay of close to £180 million (€201 million) – virtually all of which ended up being recouped in sales and loan fees – has been left confronting a cluttered schedule with his options only marginally bolstered. The Roma game is Chelsea’s second of seven in 22 days, with successive Premier League defeats either side of the recent international window having damaged the team’s title defence.

Asked whether the point will come when he has to prioritise either domestic or European competition, Conte said: “Honestly I think we have to go game by game. We are only in October and not in March. Now it’s impossible to take a decision like that. But the situation is difficult. We have to play every three days, and it’s not simple. Also because, in this moment, we are ‘thin’ and we have to play always the same players.

“Honestly, there is this type of risk to have other injuries. I hope not. But the best way, now, for us is to go game by game, and then to decide every game which is the best formation, and sometimes to take risks or not about our players.

“When you have a lot of games, you need to rotate players. If this is not possible, I have to take risks. Then, for example, against Manchester City. Morata was injured after 20 minutes. But if I hadn’t put Morata in the starting 11, you’d have told me I’m crazy. Sometimes the players need to rest instead.”

Conte had resisted the temptation to select Morata at Crystal Palace on Saturday, where defeat left Chelsea nine points off the Premier League leaders, but is confident there is no risk of the forward suffering a recurrence of his injury if he features against Roma.

“No, honestly, I could have taken a risk on Saturday and forced him to play against Crystal Palace, but I’m not so stupid,” he said. “The situation is very difficult. You have to make the best decision and, for sure, against Roma I’m not taking a risk if I decide Morata can play. He has been training with us and is in contention.

“We know very well our situation. For sure, when there are injuries of this type, to important players, then it’s very difficult for us. But there is this situation and now we must be very good to overcome and try to do our best. For sure, it’s not simple when you don’t have a lot of players like Morata, Kante or now Moses . . . important players.”

David Luiz is expected to feature in central midfield against the Italian side – who are second in the group and have their own severe selection problems with Kevin Strootman, Rick Karsdorp and Stephan El Shaarawy only just returned from injury and lacking match practice – and Eden Hazard operating just behind Morata.

That combination proved so successful at Atletico Madrid last month when Chelsea maintained their pristine start to Group C by inflicting the Spanish club’s first defeat at the Estadio Metropolitano.

Form has dwindled domestically in the period since, leaving Conte hopeful the Champions league will reinvigorate his players. “It’s a good time to play again, above all after two defeats,” he added. “To play tomorrow is very important, but you know the Champions League is a very tough tournament, and Roma are a great team. They’re doing very well in the Italian league, so we have to pay great attention. They are well organised and have a lot of great players.” – (Guardian service)

1 Gordon D'Arcy: Ireland must go after victory by frightening France into mistakes
2 Henshaw the only change as Andy Farrell names Ireland team for Paris
3 Champions Cup draw: Connacht drawn with Pat Lam’s Bristol and Simon Zebo’s Racing
4 Cian Healy: ‘Realistically I got away with murder when I was younger’
5 Giovagnoli’s appointment at Dundalk ‘a great story’ says Arsenal boss Arteta
Real news has value SUBSCRIBE