With eight goals in 10 qualifying games, the great Dane has been key to side’s success 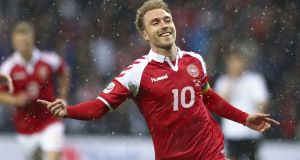 The Republic of Ireland may feel they have done well to have drawn Denmark in the World Cup 2018 playoffs but they probably could have picked a better time to come face to face with Christian Eriksen. The 25-year-old Tottenham midfielder’s eight goals in 10 qualifying games are right up there in terms of reasons why Age Hareide’s side have made the knockout stages.

People usually balk at the suggestion that their national team is something of a one-man show but nobody seems to deny that Eriksen’s performances have made him completely central to Denmark’s fortunes under Hareide with the coach tailoring his tactics to suit the former Odense and Ajax midfielder.

“He is a player of top class and there are great expectations for him,” observed the Norwegian shortly after succeeding Morten Olsen last year, “we expect him to conjure every time”.

Eriksen disappoints rarely enough these days. He has six goals in seven appearances for his country so far in 2017 and six in his last nine between club and country. For Spurs, he also has three assists to his credit since the summer. Coming up with a plan to contain him will, in short, be a key task for Ireland manager Martin O’Neill as he ponders his approach to next month’s playoff games.

“He is showing week in, week out in England with Tottenham what a good player he can be,” observed former Denmark star Brian Laudrup a little while back. “I think that this new system, with the way Hareide sets out his team, he would like to give Christian Eriksen as much freedom as possible.

“You will see the other players in midfield trying to do all the hard work, all the dirty work and let Christian Eriksen do what he is best at. In the final third of the pitch he is very good, he has great skill, great vision, great shooting ability as well.”

The change of system Laudrup refers to is the change to a more direct style adopted by Hareide before the game against Poland in September. The 4-0 scoreline caused something of a sensation and the Poles might argue that it was not entirely reflective of the balance of play but Eriksen was outstanding, even before he scored the goal of the game, a wonderful curling shot into the top-right corner from 25 yards out.

The Poles’s inability to handle him that night summed up the threat he poses in almost every game. When they sought to get close to him, he pushed on past them or somehow managed to find a team-mate in space; when they stood off, it simply allowed him more time to pick a pass or to unleash a shot from distance.

Hareide has certainly gone out of his way to make the most of talent all right, opting for a three-man attack that generally includes two big strikers, Nicolai Jorgensen and Andreas Cornelius.

The Danes don’t just hit it long, angled crosses from wide positions are a key weapon with Eriksen often the provider but when opposition defences fail to deal with the initial ball or resulting danger effectively, the 25-year-old is often the one who pops up to capitalise on the opportunity.

“Eriksen is playing out of his skin at the moment,” acknowledged O’Neill after Monday’s draw, “he is playing really, really well for has club and country. He has scored a lot of very important goals for Denmark but you could go around the squad, they are a very decent squad and we will just have to tread very carefully.”