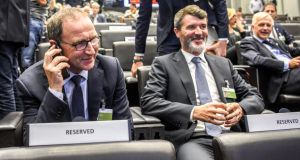 If there really was a sense that Ireland needed a little luck to nudge them towards next summer’s World Cup finals in Russia then they seemed to get it on Tuesday in Zurich where Martin O’Neill’s side were drawn to face Denmark, lowest ranked of the seeded sides, with the first of the two legs to be played in Copenhagen on the 11th of next month.

A game of different sorts is generally played in these situations by managers aiming to avoid tempting fate and both men duly responded with carefully stated caution to the news that they would face the other, although O’Neil did confirm that his preference had been to avoid Italy while his former Manchester City and Norwich team-mate, Age Hareide, confided to local reporters that for him it had been a case of anyone bar the Swedes.

O’Neill sounded enthusiastic about the prospect of coming face to face with his old friend and Hareide reflected warmly on a friendship that had been struck up after the pair arrived at Maine Road on the very same day. When the pair moved on, he revealed, the Irish man had even been his landlord for a spell.

Their reunion next month may well be amicable but O’Neill’s aim over the four days will be eviction, pure and simple.

“I know Denmark and I know the manager, Age Hareide, he and I used to play together, so it will be an interesting confrontation,” acknowledged the Irish man.

“The second match is in Dublin [on November 14th] and I hope that we will have something to play for by the time we get there. I think that all of those teams that were unseeded probably didn’t want to play Italy; that said, it’s going to be a difficult game for us but we’ll take our chances.

Hareide said that he anticipates “a tough fight” over the two legs with the Danes, he suggested, having to make the running in the home leg if they want to have an advantage to take to Dublin.

“When we start home,” he said, “it’s important that we have a good plan that we can also take away with us. In the Parken [the stadium where the first leg will be played] we must work hard to break them down. We must show our supporters that we sacrifice ourselves in tackling, racing and attacking, that we give everything we have, so we have a good starting point before going to Ireland.”

There will, one suspects, be no condescension from this opposition manager about Ireland’s “British” game. Hareide certainly has no aversion to “passion” and what are generally seen to be its other positive attributes or, indeed, the odd long ball and it might just be that self-styled purists out there will not mourn the fact that one of these teams is going to account for the other.

Ireland will be without David Meyler for the first leg due to suspension and O’Neill strongly suggested that Jon Walters is, along with Seamus Coleman, likely to miss both games through injury. A major concern in Copenhagen, though, will be the number of his players who are a booking away from being ruled out of the match at the Aviva.

He can, however, take some consolation from the fact that he is not alone in having some issues to contend with. The Danes seem set to be without Real Betis left back Riza Durmisi who was injured at the weekend while seven of their squad, including skipper Simon Kjaer of Seville, leader of the attacking line Andreas Cornelius and star midfielder Christian Eriksen, are a card away from being suspended.

The Danes pack quite an attacking punch on their day but the Irish manager is likely to feel there are pressure points there too for his players to exploit. His side seems likely to be well supported in the Danish capital too with Tuesday’s draw sparking the usual scramble for flights and hotels among fans.

Applications for tickets for that game can still be made through the FAI website while season and premium ticket holders for games at the Aviva can purchase seats for the second leg this morning with the general sale scheduled to take place on Friday morning.

Northern Ireland, meanwhile, appeared to get a slightly tougher draw with Michael O’Neill’s side set to play Switzerland at home on November 9th before travelling to Basel for the return three days later.

“Look we’re pleased with the draw to be honest and that’s not to be disrespectful to Switzerland in any shape or form,” said their manager.

“They had a very strong qualification campaign with nine victories and just missed out in the end with the game in Portugal but I think that it is possibly more difficult for them coming into the playoff in that scenario.

“We have everything to play for and the first leg being in Belfast, I think, gives us a real opportunity to get a foothold in the tie. We have been extremely strong at home, we have kept four clean sheets in the group and obviously that augers well for this tie as well but we’ve shown ourselves to be capable of scoring away from home.

“They will obviously go into the tie as favourites but it’s a tie I genuinely believe that we can win and I know the players will feel the same.”