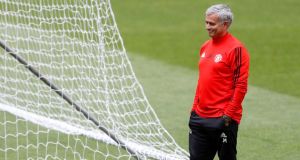 Manchester United manager Jose Mourinho: “Some people tried to be clever, malicious, and they say many things. The reality is simple - I didn’t sign a new contract but I’m not thinking about leaving too.” Photograph: Carl Recine/Reuters

Jose Mourinho has said he does not plan on signing a new contract with Manchester United imminently, but has played down suggestions he will leave for Paris St Germain.

In an interview conducted with French television that aired at the weekend, the 54-year-old Portuguese dismissed the possibility of ending his managerial career at Old Trafford.

He also spoke of his interest in PSG’s bid to shake up the established order in Europe with their recent recruitment.

After that interview, speculation emerged that Mourinho was about to put pen to paper on a lucrative new contract with United.

However, speaking in Portugal ahead of United’s Champions League clash with Benfica, Mourinho told a press conference that as far as he was concerned, nothing was about to change with his employment.

“I think you (in the) English media, you have the answer for that,” Mourinho said, when asked about how he saw his future.

“Because in one day it says that I’m going to sign a five-year contract, one-billion pounds per season and then the next day you say that I’m leaving and I’m going to Paris St Germain.

“I think that’s the answer — the answer is that nothing is happening. I’m not signing a new five-year contract and I’m not leaving for Paris St Germain. I’m at Manchester United, I have a contract and that’s it.”

Mourinho joined United in 2016 on a three-year contract with the option to stay until at least 2020.

Mourinho then reiterated that he did not feel he would follow in Alex Ferguson’s footsteps and retire as a United manager. Speaking about his interview on French television, Mourinho added: “The only thing I told - and it was true and there was no misinterpretation of my words - is that I’m not going to end my career at Manchester United.

“If I wanted to finish my career in two, three, four, five years, I would say, ‘Yes, my ambition would be to end my career at Manchester United’.

“That was my answer - I don’t think I’m going to end my career at Manchester United. Some people tried to be clever, malicious, and they say many things. The reality is simple - I didn’t sign a new contract but I’m not thinking about leaving too.”

The United boss was also quizzed on Liverpool defender Dejan Lovren’s suggestion that Romelu Lukaku deliberately kicked him in the face during Saturday’s 0-0 draw at Anfield. Belgian forward Lukaku was not punished at the time and will face no retrospective action.

“There is a big contradiction there because he says, ‘Let’s move on and forget what happened’, but then he spends 10 minutes speaking about what he thinks happened and didn’t happen,” Mourinho said. “For me, (these are) words without meaning and the FA committee is there to analyse and make decisions and no comments.”