Ryan Mason forced to retire from football after skull fracture 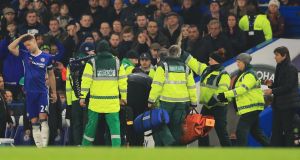 Ryan Mason was stretchered off during the Premier League match between Chelsea and Hull City at Stamford Bridge in January 2017. Photograph: Richard Heathcote/Getty Images

The Hull City midfielder Ryan Mason has been forced to retire from football after medical advice in the wake of his head injury suffered during the Premier League match at Chelsea in January 2017.

Mason suffered a fractured skull in a sickening clash of heads with Gary Cahill during his team’s loss and on Tuesday Hull confirmed the news of his retirement.

“Ryan has sought the guidance of numerous world renowned neurologists and neurosurgeons who have all advised that a return to competitive football is not advised,” read a club statement.

“Ryan would like to put on record his thanks to all at the club who have aided his recovery to this point and he his is indebted to them for their support and compassion over the past 12 months.”

Mason, who started his career with Tottenham, had loan spells with the likes of Yeovil, Doncaster, Millwall and Swindon before joining Hull in 2016. He won his sole England cap against Italy in March 2015.