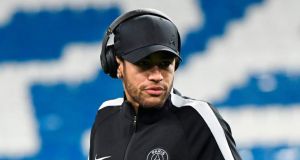 Paris Saint-Germain’s preparation for this visit to the Santiago Bernabeu began at the Camp Nou, Unai Emery has claimed.

PSG’s manager watched his team collapse in Catalonia, a 4-0 first leg lead overturned when Barcelona scored three times in seven minutes to win 6-1, completing an astonishing comeback in this competition last season, but he insisted that his team was better prepared to face Real Madrid.

His centre-back Marquinhos, meanwhile, called for “courage and personality” on the eve of a match that is likely to be partly played in the mind.

Emery was late to the pre-match press conference and when he finally got there, he did not say much, his answers short, lacking his normal loquaciousness and rarely conveying the “confidence” he repeatedly said he felt.

He said that his team found “motivation” in facing the “champions” and “12-times winners”, a status he insisted upon more than once. Another word he returned to often was “opportunity”, but this is an obligation too. PSG must overcome what happened last season – first psychologically and then on the pitch, upon which they chose not to train. “We preferred the privacy; we have been doing that often this season,” Emery said.

If that felt like a means of escape and isolation, there was something of that in the way the PSG manager spoke too, as he largely evaded questions about the mental impact of last season’s defeat. “I don’t think that will be on their mind,” the Real Madrid full-back Marcelo said, but surely something remains, some scar, and Unai did eventually say: “Maybe the preparation for this match started in that game.”

“It gave us an experience that we now want to make positive,” he continued. “We have spoken about that. Not much, but very clearly. In moments like that, in those circumstances, you can learn a lot. We are better prepared, and ready to compete at this level.”

“It was two games; one of the best and then the worst of the season,” Marquinhos said. “We have to learn from that and the lesson has to be that we impose our identity away from home as well as at home, with courage and personality.”

In the summer, PSG committed €400 million on two players as they sought to break through that barrier, including the man who led their destruction at the Camp Nou, but much of the noise in the build-up to this game has been about Neymar departing for Madrid. Marcelo said: “Madrid fans like players who are good and he is a world star and any fans would want him.” His presence for PSG increases their chances, of course, but it also increases the pressure on him and his team. “I don’t think he’s nervous,” Emery said.

Madrid too are under pressure, as is their manager Zinedine Zidane, whose side sit 17 points behind Barcelona in the league, but Europe has so often proven their elixir. “I’m not thinking about my future, I am only thinking about tomorrow’s game,” Zidane said. “I can’t control those other things; what I can control is what we are going to do on the pitch. Games are important for me; my future isn’t.

“I don’t know [who has more pressure]. We don’t have any pressure in the sense that we’re happy to be able to play these games. We live for these matches. As for them, you’ll have to ask them.” – Guardian

1 Betting shops face uncertain future as they prepare for Monday reopening
2 Tianna Bartoletta: ‘After you’ve gotten your medal, you become black in America again’
3 Timo Werner giving up on Liverpool dream on path to being truly wanted
4 Sports bodies must keep electronic records of participants as training sessions resume
5 Mature Ringrose keeping the ups and downs of rugby life in perspective
Real news has value SUBSCRIBE