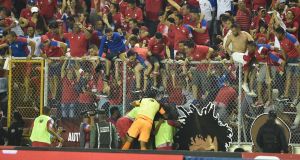 Panama qualified for the World Cup for the first ever time but could find it very difficult in Russia. Photo: Getty Images

The World Cup draw gets underway on Friday at 3pm Irish time and, while Martin O’Neill’s men won’t be there, there’s still plenty of cause for excitement as we find out who will face who in Russia next summer.

With quality teams in each of the four pots it won’t be plain-sailing for even the top sides through the group stages. That’s mainly down to the fact that the pots have been made up differently this year to previous World Cups with teams outside of pot one now grouped together based on Fifa rankings and not geographically.

It should also be noted that teams from the same confederation cannot be drawn together, with the exception being Uefa where a max of two teams can be paired together.

So, the pots are as follows:

It goes without saying that Russia are the poorest team in pot one by a long, long way and most other teams in the tournament will be confident of beating them. The hosts were abysmal at Euro 2016, finishing bottom of their group and didn’t fare much better at last year’s Confederations Cup, which they hosted. With a world ranking of 65th – sitting between Guinea and Algeria – whoever draws them from pot one will be counting their lucky stars.

While Croatia are the lowest ranked team in pot two they are far from the poorest. Despite their lofty ranking of 11th in the world, Peru have little to back that up and they only managed to squeeze into fifth place in South American qualifying on goal difference. That set them up with a playoff against New Zealand – hardly world beaters themselves – in which they edged through 2-0 after a scoreless draw in the first leg. With almost as many losses as wins (six to seven) in qualifying they stand out as punching above their weight in pot two.

Despite going unbeaten through their qualifying campaign, Iran – who are managed by former Manchester United assistant Carlos Quieroz and seeded in pot three – struggled to score goals against the opposition of South Korea, Syria, Uzbekistan, China and Qatar. Just 10 goals in 10 games with three scoreless draws and four of their six wins coming in the form of 1-0 points to a serious lack of goalscoring prowess.

Saudi Arabia are, on paper at least, the weakest team in pot four but they could not be drawn alongside Iran as both came through Asian qualifying. That leaves Panama as the standout team to make up this hypothetical group of weaklinks (or underdogs, depending on how you want to look at it). The scenes we all witnessed when the central Americans qualified for their first ever World Cup were incredible as, you’d imagine, were the hangovers the following day – a day declared as a national holiday by the president in celebration. However, their record coming into the tournament is not very encouraging, finishing second and six points behind Costa Rica in their initial qualifying group before grabbing the last qualifying place in the second stage, despite winning just one of their five matches away from home.

Germany are most people’s favourites to win the tournament next summer, particularly after they emerged victorious from the Conferderations Cup by playing what was, essentially, their second team. With an absolute embarrassment of riches available to Joachim Loew the only foreseeable problem will be trying to fit them all in and trying to keep them all happy.

Despite completing a hat-trick of major tournament titles within the last 10 years, Spain are not quite what they once were but are still extremely strong. As expected they breezed through qualifying, which included a 3-0 demolishing of Italy in Madrid, and Alvaro Morata might just be the man to solve the striking problems they encountered at the 2014 World Cup. With their usual bucket-load of tricky midfielders and the defensive strength of Sergio Ramos and Gerard Pique (provided the Catalan makes himself available and is selected in the squad), there is no reason Spain can’t go all the way again, despite being in pot two.

Iceland and Denmark (as we all know in the case of the latter) are certainly two of the teams to be avoided in pot three but, in this hypothetical situation, they could not be drawn with Spain and Germany as there is a max of two Uefa teams per group. Taking that into account, Costa Rica may be the dark horses of pot three, ready to spring a surprise on some of the big boys. In the first round of qualifying they easily topped their group ahead of Panama, dropping just two points before finishing second only to Mexico in the final stage of qualifying which also saw them beat the USA home and away, dispatching them 4-0 in the home game.

Picking a strong team from pot four is always tough and made tougher by the fact that Serbia could not be placed in this group. For that reason Japan look the most likely to cause an upset from the bottom pot. The Asians topped their qualifying group ahead of Saudi Arabia and Australia and their World Cup experience – they’ve played in each of the last five tournaments, qualifying for the last 16 on two occasions – will certainly stand to them.

1 Saudi Arabia-funded takeover of Newcastle United in serious doubt
2 Gerry Thornley: Home and away Six Nations could be its ruination
3 Decision expected next week on staging of College Football game in August
4 Kimmich floats Bayern past Dortmund and seven points clear at the top
5 World Rugby study advises removal of reset scrums to reduce Covid-19 risk
Real news has value SUBSCRIBE
Crossword Get access to over 6,000 interactive crosswords