The association should learn from past mistakes, most recently at Athlone last year 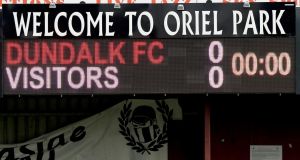 The American firm investing in Dundalk must be greeted with caution. Photo: Bryan Keane/Inpho

The fact that the FAI has confirmed it has met with representatives of the people intent on buying Dundalk should provide some small sense of reassurance about the future of the club and its possible impact on the wider game here, but it is hard to take too much comfort given the recent examples of overseas investment in the Airticity League.

Arkaga have been mentioned a lot lately but the slightly strange story of the London-based investment fund that came and went at Cork City is almost a decade old now. Of much more direct concern are the events of the season just concluded at Athlone and the way they highlighted the association’s enduring inability to effectively police its own league.

The FAI’s director of competitions, Fran Gavin, rather cheerily announced at the league’s launch back in February that he had met the investors in Athlone and suggested he had been satisfied regarding their intentions. What followed was a season that started with a floodlight failure and ended with a game for which the club had no footballs.

By late June he was effectively pleading helplessness over the issue, saying – in answer to questions about a fit and proper ownership test – that it would be open to legal challenges and clearly hinting that Abbotstown did not feel it had the resources to start standing over its decisions in court. So, imagine what will happen if it end up in conflict with an American investment operation like Peak6.

There is no particular reason to suspect that it will happen, of course, and nothing to remotely suggest that Dundalk will end up in the sort of mess that Athlone finds itself in – Peak6 and its owners have some history of investment in football clubs (most obviously Bournemouth, where they continue to hold a minority stake) and “franchises” (the company’s chairman, Matt Hulsizer, bought then sold a significant stake in NHL ice hockey outfit the Minnesota Wild) and their actions offer no obvious cause for concern.

Still, there is a concern that, whatever happens here, the FAI may – like the club’s supporters and the rest of us – end up as mere spectators on the sidelines, simply hoping for the best.

So far, we have no clear idea of what the proposed owners’ objectives are but assuming they are after a return on their investment, the two possibilities most often floated here are the introduction of players who might use the club and the league as a springboard for better, more lucrative things and the potential to achieve a measure of European success.

There is certainly little money to be made out of the game domestically as things stand with a far broader improvement of the standard across the league required before it might attract sponsorship, gate receipts and TV revenues on the sort of scale that might make fairly large-scale investment in a business sense.

In the meantime, the transfer route is an interesting one but hardly a guaranteed route to success. Several of the club’s title-winning players of recent seasons have indeed moved on to sides in England but it has been widely acknowledged that it was the players’ performances in Europe that persuaded purchasing clubs of their ability to make the required step up.

Getting a couple of games a year in Europe is no great challenge as things stand for a club here with deep pockets or, perhaps, access to an overseas pool of talent. And from next year the league winners will be guaranteed two bites of the cherry as first round losers in the Champions League qualifiers go into the second round of the Europa League, something that that will substantially improve a worst case scenario that presently amounts to no more than a few hundred thousand euro.

Prize money for the two club competitions will also go up next year when the new TV cycle comes in, but the increase is partly intended to compensate clubs from countries like Ireland for the fact that it will become that little bit harder to ever actually qualify for the Champions League group stages. That’s due to rule changes which guarantee places for top four sides from the continent’s richest leagues.

None of this really looks great in terms of a business plan and there are clubs across Europe who have been trying to crack the competition for years now without ever worrying too much about having to return a profit. Heavily backed by a quasi state enterprise in the Russian enclave of Transnistria, Moldova’s Sheriff Tiraspol have been in the qualifiers for 16 of the last 17 seasons without ever getting past the third round. This year they were beaten at that stage by Qarabag, an Azerbaijani outfit with huge support from the state-owned conglomerate Intersun, who went on to beat Copenhagen in the playoff round and so, after years of trying themselves, took their place in the group stages.

Copenhagen might more reasonably be taken as some sort of model for what might ultimately be achieved here; the club have dominated in Denmark over the past decade and make the group stages of one or other European competition almost every year, while selling on significant numbers of players at a profit. But the context in which they operate is a long, long way from Dundalk just now and the wider Danish League in general is much stronger.

The player sales element may yet, in any case, be complicated by Brexit while it remains unclear why, if you are going to have to build a new stadium and are intent on bringing in many new players over time, you would buy Dundalk in the first place as opposed to a Dublin club with a far more densely populated catchment area that has the potential to yield bigger crowds on a more regular basis.

There will, we can only presume, be answers over time. Their track record certainly suggests that these people are not fools but they are in the business of taking risks, and the rewards that flow when they come off, but while this investment may be the start of something great for the game here it might, just as easily, not work out.

It would be nice to think that the people running the league are better prepared for that eventuality than it was when Arkaga departed but the suspicion is that when it comes to international interest in our clubs, the association is somewhat out of its league.